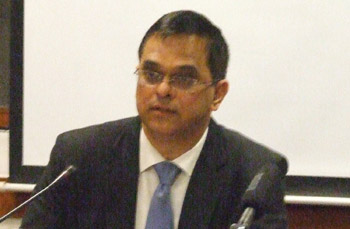 In the Chairman’s remarks, Shri Ajit Seth said that the Right to Information enabled improving governance in India by bringing transparency in decisions regarding major contracts, settlement of disputes and clarity in land matters. The large scale adoption of the Aadhar for subsidy disbursement has strengthened India’s fight against corruption. Reminscing his years as Cabinet Secretary, Shri Ajit Seth said that India’s democracy is based on strong institutions and clear separation of powers between the Executive, Legislature and Judiciary. India’s civil servants recruited through one of the world’s most competitive examinations have strived to build strong institutions. The steel frame of India’s governance helped develop process-driven governance which is rule based, with adequate accountability. India’s civil service practices included a mapping of career paths and continuous performance assessment.

As the lead speaker, Shri V.Srinivas, Additional Secretary, Department of Administrative Reforms and Public Grievances said that the bulwark of good governance policies are accountability, transparency, stakeholder participation, judicial framework and fight against corruption. He said that the challenges India’s IAS officers face in the 21st century are no different from those of the 20th century – “commitment to the larger public good against all odds.” He said that the motto “I am ethical, I am accountabe and I am the IAS” is reflective of India’s constitutional values deeply rooted in high moral tones with a universal dimension. Shri V. Srinivas deliberated on the constitutional provisions of Articles 309, 310 and 311 dealing with services and the 2ndAdministrative Reforms Commission recommendation that Article 309 “Recruitment and Conditions of Service of Persons serving the Union and the State” should be further strengthened to protect bonafide actions by civil servants. He elaborated the All India Services (Conduct) Rules 1968 which placed highest emphasis on ‘maintaining integrity and absolute devotion to duty.’

Shri V. Srinivas said that India’s fight against corruption is based on enhanced use of technology, increased transparency, greater stakeholder engagement, severe penalties with timebound completion of disciplinary proceedings, credible deterrance with strong audit and accounting mechanisms. The Central Vigilance Commission has promoted Vigilance Awareness Weeks to “Eradicate Corruption and Build a New India.” He added that strong individuals build strong institutions.  The common traits of institution builders are an “Aim High attitude”, deep commitment to pro-poor policies, deep understanding of India’s institutions, courage, conviction and integrity to take decisions in critical challenging times, and the capacity to engage with the political leadership in coherent policy discussions.

During discussions, the Permanent Secretaries of Gambia appreciated the progress made by India in the areas of transparency and accountability with independent constitutional bodies like the Central Information Commission, the Central Vigilance Commissoin and C&AG. They felt that it was a unique opportunity for Gambia’s senior officials to understand the best practices of India’s governance model.

The National Center for Good Governance (NCGG), India’s leading civil services training institution, has been training Civil Servants from a number of countries in South Asia and Africa. Recently, the NCGG had entered into a collaboration with the Maldives Civil Services Commission for capacity building of 1000 Maldives civil servants over the next 5 years. The agreement was signed during the visit of the Prime Minister of India to Male on 8th June 2019. The Ministry of External Affairs bears all expenses pertaining to the training program under ITEC. The training of Gambia’s Permanent Secretaries and Deputy Permanent Secretaries represents an important step India-Africa collaboration. The 2 week training program is being held at Mussoorie and Delhi from June 10 to June 21, 2019.

Secretary, DARPG inaugurate the Symposium on ‘Imagining India@2047 through innovation’