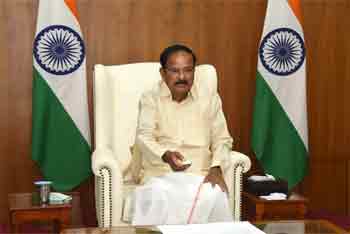 The Vice President, Shri M. Venkaiah Naidu today called for inculcating nationalistic values in youth and asserted that protecting national interests should be the highest duty of every citizen.

Observing that India always believed in the philosophy of ‘Vasudhaiva Kutumbakam’, he underlined the importance of promoting the concept of universal brotherhood across the globe.

The Vice President was releasing a book – ‘Spoorthi Pradatha Sri Somayya’, the life story of late Shri Somepalli Somaiah, a noted social worker from Andhra Pradesh. Shri Naidu mentioned that he considered Shri Somayya as one of his foremost ‘gurus’ and credited him for shaping his personality at a young age.

Shri Naidu recalled Shri Somayya’s contributions in relief and reconstruction activities for the cyclone victims in Andhra Pradesh and said that he ‘inspired many youth to devote their lives for the welfare of the people.’

Paying rich tributes to Shri Somayya for his commitment to nationalistic values, the Vice President called upon the youth to read and take inspiration from life stories of such leaders and freedom fighters. ‘To practice and live by their principles and to become partners in our national progress is the greatest tribute we can pay to them, he said.

Referring to the challenges that are hindering the progress of the country like poverty, illiteracy, corruption and social discrimination, Shri Naidu called for concerted efforts to eradicate them and other social evils in society.