Home Other Indian State News Yoga is a spiritual, mental and physical practice 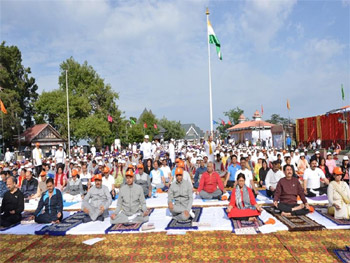 While addressing the media on the sidelines of the function, Chief Minister said that Yoga is a spiritual, mental and physical practice that has been around since ages and people have discovered a number of health benefits associated with Yoga. He said that Yoga does more than burning calories and strengthening muscles, it is a workout which involves both body and mind.

Jai Ram Thakur said that International Day of Yoga was celebrated throughout the world for first time on 21st of June in 2015 on the initiative of Prime Minister Narendra Modi who during his address in the United Nations General Assembly on 27th of September in 2014 highlighted benefits of Yoga and urged to celebrate Yoga Day throughout the world. He said that over 170 countries of the world are celebrating the International Yoga Day now. Millions and millions of people across the globe have benefitted by the practice of Yoga and it is blossoming and growing more vibrant with each passing day, he said.

Chief Minister said that recently during his visit to the Netherlands he was fortunate to be the part of International Yoga Day celebration held at Royal Palace on Dam Square in the heart of the capital city of the Netherlands. He said that thousands of people besides representatives of Dutch armed forces participated in the traditional Yoga session. He said that more over the Dutch Ministry of Defence has introduced yoga exercises for armed forces to enrich their training program and reduce stress.

Special children of Dhalli school performed Yoga on the occasion.

Two minutes silence was observed to pay homage to the victims of Banjar bus accident of Kullu district.