Women make great leaders as they are natural multitaskers

Union Human Resource Development Minister Shri Ramesh Pokhriyal ‘Nishank’ felicitated women employees working in the Ministry of HRD at an International Women’s Day Celebration programme in New Delhi today. He expressed his gratitude to the women officers and other women employees and appreciated them for their hard work and contributionto the education sector. The Minister of State for HRD Shri Sanjay Dhotre also graced the occasion.

Speaking on the occasion, Shri Pokhriyal said that women make great leaders as they are natural multitaskers. The potential and abilities of the women are undeniable. They can balance both professional and personal life skills in an exceptional manner. He said that a woman has always been portrayed as a power and goddess. Our sages believed that where the woman is worshiped and gets due respect, the deity resides there. Underlining the important role of women for nation building and development, Swami Vivekananda has said that a country which does not have respect for women, can never progress.

The Minister said that under the leadership of the Prime Minister Shri Narendra Modi government is taking various women-centric policy measures for theempowerment of girls and women through education so that the female work force participation can be enhanced in the country. The HRD Minister has said that the Government has taken several game changing initiatives since 2014 for the education of the girl child. This is one of the reasons for the success of the scheme of Beti Bachao Beti Padhao whereby the Gross Enrolment Ratio of girls across all levels of education is now higher than boys. He hoped that the girls/women will outshine boys in all fields.

While addressing the gathering Shri Dhotre said that the society which has treated its women well, has prospered. When women's potential is unleashed, it benefits the society immensely. It is a mother who touches everyone's life most deeply and becomes one's first and foremost teacher. In this modern world there is not a single sphere untouched by women. And in our country, women have excelled in different sectors and have contributed so much in driving our country forward.

The Minister was delighted to interact with the cheerful women employees of the Ministry. He expressed his gratitude towards them by presenting flowers to them. Shri Pokhriyal and Shri Dhotre also clicked selfie with the officers. The female employees were overwhelmed with the felicitation by the HRD Minister Shri Ramesh Pokhriyal ‘Nishank’ and MoS HRD Shri Sanjay Dhotre. 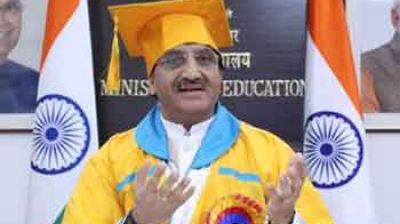 These are framed to provide adequate support and cooperation to...

National Education Policy 2020 calls for a positive change in...

Speed up the process of filling up the vacant posts...

These rankings acts as a guide to students for selection...