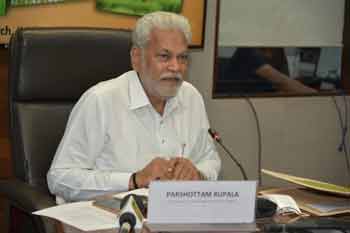 INVC NEWS
New Delhi,
The Indian Council of Agricultural Research, New Delhi virtually celebrated the “International Women’s Day - 2021” today. Shri Parshottam Rupala, Union Minister of State for Agriculture & Farmers’ Welfare accentuated that the International Women’s Day is to celebrate the significant contributions of women on various fronts of human life. He also highlighted the Central Government’s various Schemes that are aimed at empowering the women in every aspect of life. In all the spheres of life science, politics, engineering, medicines, arts, games, education, agriculture and army, etc., “#Naari Shakti” is working shoulder-to-shoulder with men.

Shri Kailash Choudhary, Union Minister of State for Agriculture & Farmers’ Welfare stated that the women have pioneered in every sector of the society and stressed that women’s contributions in the agricultural and farming sectors are commendable. The Minister stated that their hard work has made the country proud of them. Shri Choudhary outlined the Prime Minister’s various women-centric beneficial schemes namely “Beti Bachao, Beti Padhao” that are aimed at empowering them on various fronts to help them lead a respectable and self-dependant life. The Minister emphasized that the roles of women is pivotal in realizing the aim of doubling the farmers’ income.

Smt. Archana Chitnis, MLA, Madhya Pradesh emphasized that the women play significant roles in every spheres of life. She stated that women are the real torch-bearers of the society. Smt. Chitnis accentuated on ensuring nutritional security to the women involved in agriculture as they are the future of the country. She also accentuated on providing quality education to such women.

The various women were also felicitated for their unparalleled contributions in the fields of agriculture and farming.The occasion also marked the release of various ICAR Publications by the dignitaries.