Shri Modi interacted with various sports persons, fitness experts and others during the Fit India Dialogue event organised on the occasion. The virtual dialogue was conducted in a casual and informal manner where the participants shared with the Prime Minister their life experiences and their fitness mantra.

Prime Minister lauded Shri Devendra for bringing laurels to India at various World Parlympic events. He inquired from Devendra as to how he overcame his challenges and turned him into a World famous athlete.

Devendra Jhajharia narrated the difficult phase after he lost an arm owing to an electric shock and how his mother inspired him to behave as a normal child and work towards fitness.

To Prime Minister’s query on how he dealt with his latest shoulder injury and he overcame his mood to retire from the sport, Devendra Jhajharia said that one has to believe in oneself first to overcome mental and physical challenges.

He demonstrated some physical exercises and discussed the fitness regimen he followed to overcome his injury.

Prime Minister praised the Paralympic Gold Medalist for having done a such an inspiring job and paid accolades to his mother for keeping herself at the age of 80.

The Goal Keeper from Jammu and Kashmir said that it is necessary that every woman should keep herself fit, as she plays the role of a mother and caretaker of the family. She discussed how she is inspired by M S Dhoni calm style of functioning and how she meditates daily in the morning to keep herself calm and composed.

Prime Minister inquired about what is the traditional way people of J&K keep themselves fit, despite the extreme weather conditions. Afsan discussed how they trek and how it improves their fitness levels. She also said that as people of J&K live in high altitudes they have more lung capacity and that they have no breathing problems when involved in physical activity elsewhere.

Afsan also talked about how she needs to mentally focussed and physically flexible as a goal keeper.

Referring to Milind Soman as ‘Made in India Milind’, the Prime Minister said he, in his own ways, has been a vocal supporter for Make in India. Milind Soman said the Fit India Movement has led to awareness among people, they are now aware of their physical and mental strength. He talked about the fitness of his mother. Soman said in the past people were fit and they used to walk 40-50 kms in villages to fetch water. But nowadays due to access to technology in cities we lead a sedentary lifestyle which makes us prone to many problems.

Prime Minister said that fitness knows no age and lauded Milind Soman’s mother for maintaining a fitness regimen which included even push-ups at the age of 81.

Milind Soman said that one can remain fit and healthy by using whatever they have, it only requires confidence and determined thought to do so.

Milind asked PM how he handles criticism, on this PM said work done with complete dedication, with the feeling of serving everyone and a sense of duty does not cause stress. The Prime Minister said Competition symbolizes a healthy way of thinking, but one should focus on competing with self rather than with the other.

Rujuta Diwekar stressed the importance of going back to old ways of eating i.e dal, chawal and ghee culture. He said if we eat local produce, our farmers and our local economy is going to benefit too. The vocal for local attitude is very important.

He spoke of international trends where people are learning how to make ghee and realising the importance of haldi-milk.

Diwekar talked about avoiding those foods that damage our physical and mental health. Every region has their specialized foods and gharkakhaana is always helpful. If we stop packed and processed foods and eat more home-made foods, we can see a bunch of benefits.

He talked about his gurus and inspiration drawn from them to spread the importance of yoga. He referred to the ways and methods Ancient Teacher-Disciple Gurukul tradition which focussed on the physical and mental development of the student.

He termed Yoga as not just an exercise but a way of life, which was inculcated during the Gurukul days.

The Prime Minister talked about customizing yoga according to the changing lifestyles.

The Prime Minister discussed with ViratKohli about his fitness routine. Virat said mental strength goes hand in hand with your physical strength.

When the Prime Minister asked how he gave up Delhi’s famous Chole Bhature, Virat talked about how simple home cooked meals along with bringing discipline in diet help in increasing fitness levels.

Shri Modi discussed how to maintain calorie intake. Virat said the body needs to be given time to process the ingested food. The PM talked about the YoYo test and stressed the importance of bringing in fitness culture. Virat said with good sleep, food and fitness the body will recover in a week's time when the PM asked whether he doesn’t feel tired.

Mukul Kanitkar said fitness is a concept not only for the body but also for the mental and social health. He stressed on the need for building a culture of health. He praised the Prime Minister for being an advocate of the Surya namaskar. He described the Bhagavadgita as a discussion between two fit people.

He praised the Prime Minister for making fitness a part of the curriculum in the National Education Policy - 2020 and inspiring everyone to work towards a FitIndia. He said Fitness is a combination of mann (feeling), buddhi (knowledge) and bhavna (thoughts).

Speaking on the occasion, the Prime Minister said the Fit India Dialogue focuses on the fitness interests of every age group and brings into play different dimensions of fitness.

Shri Modi highlighted the fact that there is a high amount of mobilization in the country towards fitness, after the launch of the Fit India movement. Awareness on health and fitness has been increasing continuously and activeness has also increased. He expressed happiness that Yoga, Exercise, Walking, Running, healthy food habits, healthy lifestyle has become a part of our consciousness. He said the Fit India movement has proved its influence and relevance in this corona period in spite of the restrictions.

The Prime Minister said staying fit is not as difficult a task as some think. With a little discipline and a little hard work you can always be healthy. He gave the mantra 'Fitness dose, Half an hour everyday' for everyone's health. He urged everyone to practice yoga, or badminton, tennis or football, karate or kabaddi for at least 30 minutes daily. He said today the Youth Ministry and Health Ministry together released Fitness protocols.

The Prime Minister said today awareness about fitness has become worldwide. World Health Organization - WHO has made a Global strategy on Diet, physical activity and health. They have issued a global recommendation on Physical activity also. Today many countries like Australia, Germany, Britain and the US have set new goals for fitness and are working on them. A large-scale campaign is going on in many such countries at the moment and more and more citizens are joining the routine of daily exercise.
Read the full article
Tags: Narendra Modi WHO 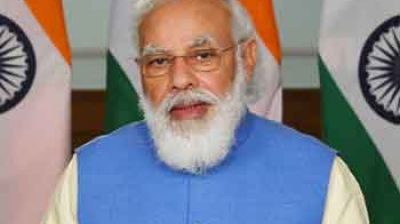