Westwood snares the main prize from the room with a view at Atlantis, The Palm!

INVC,
Palm,
It is one thing to admire the shimmering silhouette of the Dubai skyline from the 22nd floor of your holiday hotel, but today five of the world’s leading golfers had their sights trained on an altogether different aspect from the Royal Bridge Suite at Atlantis, The Palm.
The view from the Bridge, which provided an exotic location for the DP World Tour Championship Atlantis Golf Challenge, 90m above ground, provided Henrik Stenson, Justin Rose, David Howell, Lee Westwood and Martin Kaymer with a unique bird’s eye view of a 9m x 5m ‘green’ constructed on a DP World barge in the lagoon far below the tournament’s Official Hotel.
And, ahead of Thursday’s season-ending DP World Tour Championship, Dubai at Jumeirah Golf Estates – the tournament which brings The Race to Dubai to a thrilling climax –it was left to the inaugural Race to Dubai winner, Westwood, to hit the target and claim the first prize of the week in this special ‘nearest the pin’ competition.
By finishing just four feet away from the flag on the specially constructed DP World floating pontoon, anchored just off shore in the Arabian Gulf, Westwood accepted the winner’s trophy from RaviniPerera, Senior Vice President, Sales, Marketing and PR at Atlantis, The Palm, and FerasDahlan, Government Relations, DP World.

Appropriately, in view of the venue, Westwoodalso received a special luxury package, which includes a stay in one of the unique ocean themed Atlantis Underwater Suites, featuring floor to ceiling views of the Ambassador Lagoon and its 65,000 marine inhabitants.
The DP World Tour Championship Atlantis Golf Challenge, in partnership with title sponsors DP World, Nakheel and The European Tour, featured all five players hittingten shots each from the balcony of the 924 square metre Royal Bridge Suite, to the floating green 235 yards (210 metres) beyond the swimming pool and beach.
Stenson took on the role of hostfor the ‘Made for TV’ event, with hotel guestsat Atlantis, The Palm invited to view the spectacular stunt from the beach, 300 feet below the balcony Westwood’s victory was confirmed by a ‘Guest Referee’ in swimming trunks – namely Ian Poulter, enjoying the sun on the beach, who volunteered to join the official referee in adjudicating on the barge and delivering the verdict.
Westwood said “It was great fun. I like challenges like this at the start of a week and today’s one certainly focused the mind with such a small target in the lagoon. I was fortunate to get the right club – a seven iron – and I manage to catch it perfectly.
“Dubai is a special place for me. I’ve had a bit of success here and it’s great to be back for the DP World Tour Championship.”
Stenson added: “I was delighted to welcome the guys into my humble home for the week. The shot itself was quite intimidating, especially getting straight out of bed onto my balcony to try to hit a six or seven iron to a tiny target. It was great fun, though.”
US Open Champion, Rose, added: “Hitting from the Bridge Suite of this iconic hotel gave a great perspective of Dubai as well as providing a great way to kick off a big week on The European Tour.”
Serge Zaalof, President and Managing Director of Atlantis, The Palm said:“Atlantis has hosted many spectacular events in the past, as the Official Hotel of the DP World Tour Championship since 2009.We are delighted to have initiated this unique golf stunt with five of the world’s top players.”
Read the full article
Tags: tourism invc free news agency of india The Palm Westwood snares the main prize from the room with a view at Atlantis Royal Bridge Suite at Atlantis DP World Tour Championship Atlantis Golf Challenge DP World Tour Championship Atlantis Golf Challenge DP World Tour Championship Atlantis Golf Challenge DP World barge Made for TV event with hotel event with hotel in india event with hotel in tourism Delhi 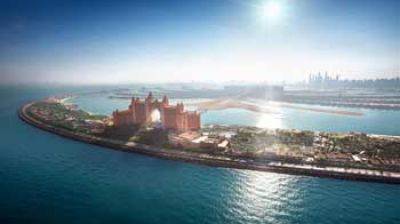