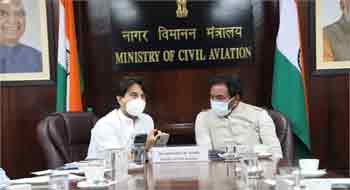 They discussed issues included expediting the Greenfield airport at Holongi, Itanagar, Arunachal Pradesh, and the all-weather operability of Pakyong Airport, Sikkim. The ministers also reviewed the Krishi Udaan Scheme and the Sea Plane services. The Minister of Civil Aviation assured the fast tracking of Greenfield Holongoi Airport at Itanagar for completion by August 2022 in time for “India@75”. He further added that the fast-tracking and completion of the civil aviation projects in the North Eastern Region (NER) will improve the connectivity within the region and provide a boost to the Tourism Industry.

The Union Minister for Tourism, Culture and Development of North Eastern Region( DoNER), Sri G Kishan Reddy said “The relentless efforts of our The Prime Minister Shri Narendra Modi to develop the North Eastern Region and promote the 8 states have been ongoing since the government came to office. We will work for the welfare of the people of the North East and also promote tourism in the region”. The Union Minister for Civil Aviation suggested the constitution of an advisory committee with representation from the Ministries of Civil Aviation, Railways and Road Transport and Highways and Environment and Forest under the chairmanship of the Minister for Tourism, Culture and DoNER for building synergies towards tourism development and to promote all the infrastructure related activities in a holistic way.

Minister Civil Aviation was confident that the pending land acquisition issues with the Government of Arunachal Pradesh, Assam, Sikkim will be resolved soon.  He further sought the Minister for DoNER’s intervention for early resolution of these issues. He said that “these issues have already been raised with the 8 North-Eastern States and could subsequently be taken forward through joint Meeting with the Chief Ministers of North Eastern States”. He also suggested that smaller cities with fewer passengers could operate helicopters instead of fixed planes as the operational cost of the helicopters are comparatively lesser.

Both the Ministries pledged to work in close coordination to promote higher volumes of agro- horticulture products in convergence with other Ministries ie. Agriculture, Food Processing Industries etc through the Krishi Udaan Scheme of the Ministry of Civil Aviation. Hon’ble Minister of DoNER assured support of Ministry of DoNER and its attached offices for ensuring timely implementation of various projects for improving air connectivity for promoting business, tourism and livelihood opportunities as per the vision of Prime Minister.
Read the full article
Tags: National News Latest news New Delhi Jyotiraditya M. Scindia

The States and UTs to bring down VAT on aviation...

CBI files separate chargesheets against six accused in a case...