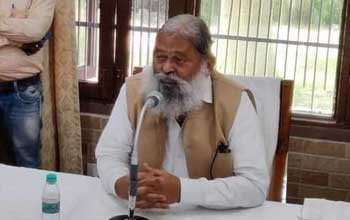 INVC NEWS
Haryana,
Haryana Home Minister, Sh. Anil Vij, while reacting to the results of the Ellenabad bye-elections today, said that of course, “Abhay Singh Chautala is winning these bye-elections but is losing the elections on moral grounds.

Sh. Vij was interacting with the mediapersons here today.

Sh. Vij said that “the issue for which he (Abhay Singh Chautala) had resigned and contested again, if that issue had merit, his votes would have increased and his margin should have increased, but his margin is lesser than earlier.”  This proves that people have completely rejected his agenda.

Similarly, he took a dig at the Congress party and said that “the Congress party, which is doing the work of adding fuel to fire in the country, has also been shown its place in Haryana politics by the people of Ellenabad”.

Responding to a question regarding the results of the bye-elections held in Himachal Pradesh and Bengal, he said that “we will analyse these results”.