We should not forget our language : Virbhadra Singh

INVC NEWS Shimla, Rich cultural traditions of the State today are not limited to borders of the country but reached to other parts of the world with youth of the State carrying forward these traditions globally, said Chief Minister Virbhadra Singh while addressing the students at HP University here today.

Chief Minister was presiding over the cultural evening organized by Kinnaur Students Association. He said that the people of Kinnaur had preserved their traditional customs and culture, which was in the better interest of the State. Today Kinnauri cuisine and its culture was famous throughout North India and  credit goes to the youth of Kinnaur pursuing higher studies in various educational institutions in Punjab, Delhi and other states. The Chief Minister said that no matter how far we climb the ladder of success, we should not forget our language, our culture and our traditions, due to which we were recognized. He also announced a sum of Rs. 50,000 for Kinnaur Student Association for promotion of cultural activities. Earlier, President, Kinnaur Students Association Shri Adarsh Negi welcomed the Chief Minister and detailed about the activities of the Association, while General Secretary Ms. Sushma Nalanda paid vote of thanks. Deputy Speaker H.P. Vidhan Sabha Shri Jagat Singh Negi, MLA Shri Bambar Thakur were also present on the occasion amongst the others.
Read the full article
Tags: chief minister virbhadra singh INVC NEWS Shimla We should not forget our language : Virbhadra Singh Rich cultural traditions students at HP University Kinnaur Students Associatio cultural activities 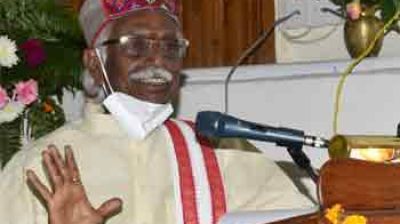