Home Latest news We should capitalise on opportunities that have been thrown open during the... 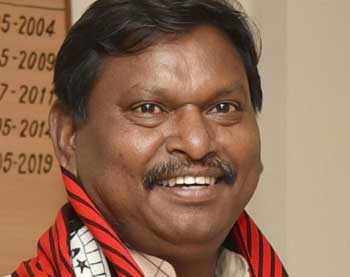 The unprecedented situation in our country due to the ongoing Covid-19 pandemic has affected all segments of our society. The livelihoods of the poor and marginalised communities have been seriously impacted and the tribals are some of the worst affected in these trying times.To ease the burden of the tribal artisans during such troubled times, TRIFED, Ministry of Tribal affairs has initiated several immediate initiatives to re-energise the lagging economic activity for sustaining the livelihood development of tribals. . Addressing a video Conference to launch the Trifed Digital Platforms, through Video Conference, Shri Arjun Munda, Union Minister for Tribal Affairs said that the Team of “Trifed Warriors”will take Tribal Commerce based on forest produces, handlooms & handicrafts to a new high for transforming tribal lives and livelihoods. He stated that with more and more people going online to meet their various needs – be it for business operations, shopping and communication, an important strategic push has been to adopt an all-encompassing digitisation drive to map and link its village based tribal producers to the national and international markets setting up state of art e- platforms benchmarked to international standards.

This was the key focus area of the webinar ‘TRIFED Goes Digital’ and “Be Vocal for Local’ #GoTribal ”which was organised by TRIFED today and was attended by over 200 participants. The main highlight was the launch of the TRIBES India products on the Government e-Marketplace  (GeM) (with a diverse range on display) and TRIFED’s new website (https://trifed.tribal.gov.in) by Shri Arjun Munda, the Union Minister of Tribal Affairs.Shri Ramesh Chand Meena, Chairman, TRIFED, Smt. Pratibha Brahma, Board Member, TRIFED, Shri Rajeev Kandpal, JS& CFO, GeM and Smt Nanu Bhasin, ADG, PIB also attended the launch. The TRIFED team was represented by all the heads of departments and senior officials.

Expressing his hearty appreciation at the occasion, Shri Arjun Munda, the Union Minister of Tribal Affairs first inaugurated the TRIBES India store on Government eMarketplace which can now help in facilitating purchases by Government and then the revamped website (https://trifed.tribal.gov.in/), which has all relevant details about the schemes and initiatives underway to the benefit of tribal communities.

In his address, Shri Munda spoke about the unprecedented situation that our world is facing and how the migrant labour have suffered a lot. He expressed his pleasure at the efforts being put by “the TRIFED Warriors” and the Ministry officials to revive the flagging economic condition of the tribal artisans and tribal gatherers. He emphasised that empowering the tribal communities and utilising their skills, which has so far been disconnected from the mainstream, should be of prime focus and we should capitalise on opportunities that have been thrown open during the unprecedented situation.

Shri Munda opined that TRIFED plays a major role in connecting the tribals to the mainstream and congratulated the team for their two major initiatives being launched today. Using nuggets from philosophy and management principles and real-life examples, he shared his views on the road ahead for the Ministry of Tribal Affairs and “the TRIFED Warriors” as they set about in their task to include the tribal communities in the mainstream. He urged them to focus on extracting and utilising the wealth of information and knowledge that the tribal communities have, especially with regard to the jungle, and how that can be used to not just benefit their community but also be of greater help to the country and people in these troubled times.

Post this detailed presentation on TRIFED’s activities, Shri Ramesh Chand Meena, Chairman, TRIFED congratulated the entire TRIFED team for its sustained efforts and was positive that the Rs 2 lakh crore tribal economy will definitely get doubled or trebled. Also he was certain that these efforts would result in the products and produces of tribal gatherers and artisans would get maximum coverage – both in the country and abroad.

Earlier, in his welcome address, Shri. Pravir Krishna, Managing Director, TRIFED thanked the Union Minister for his presence at the formal launch of the two digital initiatives through a webinar – a first definitely. Acknowledging the Union Minister’s unstinted support for the cause of tribal welfare, Shri Krishna spoke about TRIFED’s ambitious digitisation drive and how this is aimed at creating a level playing field for more than 50 lakh tribals (artisans, gatherers, dwellers) who will be connected with the mainstream using state-of-the art technology. Mr. Krishna also thanked the GeM team for their cooperation in making the Tribes India store going live on GeM a reality.

Shri Rajeev Kandpal, JS& CFO, GeM in his address, spoke about how the TRIFED and GeM teams have worked hard under the overall guidance and leadership and this has resulted in the Tribes India store on GeM. Government Departments Ministries and PSUs can now access TRIBES India products via Government e-Marketplace (GeM) and shop as per GFR regulations.He pointed out that social inclusion was a major focus in GeM and that niche supplier segments such as start-ups, rural entrepreneurs, tribal entrepreneurs, women, tribals have been encouraged. Taking the example of the newly-inaugurated Rural Development store, which has generated positive response,

Post this speech, a detailed presentation was made about the all-encompassing digital transformation strategy embarked upon by TRIFED and also the various measures put forth by the team to help ease the situation of the tribal community. The presentation began with a focus on the digital initiatives which are underway, especially two of which are being launched today. It also covered, at length, the measures taken by TRIFED and the Ministry of Tribal affairs to help ease the burden of tribals in the country. Touching upon both the MSP for MFP Scheme which has now emerged as a panacea for tribals with a total procurement of Rs 2000 crore (through government and private trade) and the successful implementation of the Van Dhan Yojana (Start-ups scheme), an initiative of the Ministry of Tribal Affairs, which has resulted in the establishment of 1205 Tribal Enterprises and providing employment opportunities to 3.6 lakh tribal gatherers and 18075 Self-help groups in 22 States, the presentation covered the impact of these and other initiatives. In particular, outcomes from different champion states such as Maharashtra, Odisha, Chhattisgarh, Nagaland, Manipur were highlighted as examples. The presentation also threw light on the other measures during this crisis.

TRIFED has issued Advisories relating to MFPs to be kept in mind during Covid-19, providing suggestive practices for maintaining personal hygiene, adopting cashless practices, among others. It is working on setting up of 15,000 ‘Van Dhan Social Distancing Awareness cum Livelihood Centres’ from the recently sanctioned Van Dhan SHGs among the 1205 Van Dhan Kendras. TRIFED has also collaborated with UNICEF for developing a digital communication strategy for promoting the Abhiyaan. Additionally, TRIFED has partnered with the Art of Living Foundation’s #iStandWithHumanity Initiative with a Stand With Tribal Families component in providing much needed food and ration for survival of the tribal community.

The digital strategy takes into account the entire supply-demand tribal chain, each and every stage, and includes a state-of-art website ((https://trifed.tribal.gov.in), which offers all information related to the organisaton and its various tribal welfare schemes; setting up of an e-Market Place for Tribal Artisans to trade and directly market their produces; digitisation of all information related to the forest dwellers engaged in its VanDhan Yojana, village haats and warehouses to which they are linked.

Keeping every aspect of tribal lives and commerce in mind, TRIFED has also commenced the digitisation of the procurement of MFPs through government and private trade and the related payments to tribals. Leveraging the e-commerce boom, TRIBES India products are available at www.tribesindia.com with all regions working together to ensure that varieties and offerings of all kinds are readily accessible at other platforms such Amazon, Flipkart, Snapdeal, Paytm, and Shopclues. These products range from creative masterpieces and artefacts such as Dokra metal craft pieces, beautiful pottery, different types of paintings to colourful, comfortable apparel, distinctive jewellery and organic and natural foods and beverages.

In addition, the Tribes India e-Marketplace, coming on the heels of the Retail Inventory Management System which has automated the sourcing and sale of stocks, is an ambitious initiative to on-board almost 5 lakh Tribal Artisans on the e- market platform to provide them access to national and international markets. This is likely to be commissioned by end July 2020.

TRIFED’s VanDhan Integrated Information Network facilitates the pooling of all information pertaining to forest dwellers engaged in Minimum Support Price Operations and its VanDhan Yojana linking them up to Village haats and Warehouses. This helps in monitoring the country wide programme and taking decisions to facilitate smooth implementation. This scheme has been implemented in 22 States touching the lives of almost 3,61,500 Tribals. The tribal clusters identified and mapped across the country are eligible beneficiaries under Atmanirbhar Abhiyan. The aim is to work in convergence with various Ministries and agencies and help bring the benefits to these vulnerable and distressed communities. TRIFED is equipped to advocate and support the tribal cause under Atmanirbhar Abhiyan.

Shri Anil Ramteke, ED, TRIFED concluded this inspiring and informative session with his Vote of Thanks. He thanked the Union Minister, Shri Arjun Munda for his inspiring and wise address and looked forward to his continued leadership and guidance.

Cooperative Societies on GeM Platform: A step towards a transparent, efficient, and economic procurement system

The GeM platform is especially empowering MSMEs, with 57% of order value coming from MSME sector