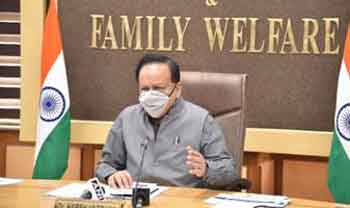 The States/ some districts in the States have been reporting a rise in the number of cases, high average daily cases on a seven day average, decline in testing, high rate of mortality within the first 24/48/72 hours of hospitalisation, high doubling rate, higher death among the vulnerable population groups.

Dr. Harsh Vardhan started by reminding everyone that the country had stepped into the 11th month of the pandemic with the first meeting on COVID being held on 8th of January. Restating his concern that the coming winter and the long festive season pose a significant risk that could threaten the gains made collectively till now against COVID-19, he said, “We all need to bemore vigilant for the entire festive season that started with Dussehra and would continue onto Diwali, Chhat Puja, Christmas and then onto Makar Sankranti in the next year. Respiratory virus also spreads rapidly in the winter months.”

Sharing the nation’s journey through COVID, he spoke how the country increased the numbers of labs from one in NIV, Pune in January to 2074 today thereby increasing the testing capacity to 1.5 million per day. He also mentioned about the increased number of general, oxygenated and ICU beds at each level of COVID care hierarchy. He informed everyone that of the total active cases, only 0.44% are on ventilator support,2.47% are in ICU and just 4.13%occupy oxygen supported beds. He also added that India has the highest recovery rate and one of the lowest fatality rate, globally.

Briefing the audience about his recent interaction with State Health Ministers and senior health officials of Uttar Pradesh, Madhya Pradesh, Gujarat, Delhi, Tamil Nadu, Karnataka and Chhattisgarh, he assured everyone that the trajectory of the disease is being monitored personally by the Prime Minister: “The Prime Minister has addressed the nation on various issues of COVID several times. He has held intense discussions with all CMs and Heads of UTs. His latest address was only of ten minutes but had the important message of continued adherence to COVID Appropriate Behaviour and its transformation to a Jan Andolan”. He also elaborated steps taken by the government to promote Jan Andolan, like dissemination of the message through caller tune and other IEC activities. He concluded by saying that COVID Appropriate Behaviour still the best bet against COVID and that following it was easy.

Dr. Sujeet K Singh, Director, National Centre for Disease Control (NCDC) apprised everybody on the trajectory of COVID and the Public Health Response efforts/interventionsin the respective States. He highlighted the issues and regions/districts of continued concern.

The State Health Ministers shared a brief snapshot of the actions taken for containment, surveillance and treatment of the COVID positive cases. They also highlighted the best practices being followed.

Shri Rajesh Bhushan, Union Health Secretaryrequested all the States to focus on ten key areas to contain COVID and gain an upper hand over its trajectory: increasing testing; targeted testing at market-places, workplaces, religious congregations which could have the potential to become super spreaders; increasing the share of RT-PCR in testing; compulsory testing of symptomatic RAT negatives; completion of contact tracing within the first 72 hours; tracing of an average of 10-15 contacts per new case detected; promotion of health seeking behaviour to curb the percent of deaths within the first 24-72 hours of hospitalization; conduct of hospital wise death analysis every day and intervene, if necessary, to bring mortality below 1%; protection of vulnerable groups such as those above 60 years of age and those with co-morbidities; promotion of COVID appropriate behaviour through Behaviour Change Campaign where elected representatives of panchayati raj institutions, urban local bodies, MPs, MLAs and local influencers appeal to people to follow COVID appropriate behaviour.