Water Crises in India : Water Resource Management is the Key

This book elucidates the efforts taken by the State of Rajasthan under the supervision and guidance of Mr. Sriram Vedire, a water deprived state for their water resource management, processes and the use of technology for scientific planning. The book throws light on all aspects involved in this greatest challenge and elaborates the steps taken in planning, execution, monitoring and review processes.

While launching his book Mr. 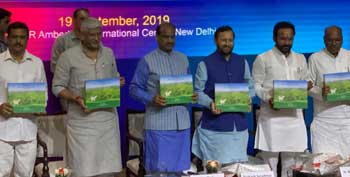 said, “I am honoured and overwhelmed to launch my 5thbook in the presence of such honourable and inspiring personalities. I have tried to bring in the key areas of work on water resource management that we have executed in the State of Rajasthan during the past five years. The enormous results seen in providing water to the poorest of poor in the remotest village in Rajasthan has been one of the most cherishing moments of my life both professionally and personally.”

“The thought behind penning down all the innovative planning and execution practices on effective utilization and management of water resources that we implemented in Rajasthan is with the aim of guiding other states with ideas and effective processes to utilize existingwater resources”, he added.

In the book, the author has also addressed the acute shortage of water in the desert state of Rajasthan and how they implemented pioneering solutions in water management by establishing a River Basin & Water Resources Planning Authority with statutory powers to plan water resources management with “River Basin” as a unit. The planning included attacking the problem from both micro and macro levels of planning. Taking river basin as a unit in planning both these micro level (bottom up approach) and macro level (top down approach) are covered in the chapter “Water Management with River Basin as a unit of planning” in the book.

The book is a fine specimen of academic writing, management and practical experience on critical issues States are facing in today’s world. The author’s previous books have been lauded by eminent personalities, especially those who have been catalysts of change in the field of water management programs and sustainable development. The book launch promised an evening of high-level deliberations

The Author, also the Chairman of Rajasthan River Basin & Water Resources Planning Authority, Government of India, has been actively involved in many other water conservation programs like interlinking of Rivers and Urban Water Management, ground water recharge, water harvesting, cleaning of River Ganga to name a few.

Profile of the Author

Sriram Vedire worked as an Engineer in USA for 15 years and then decided to move back in the year 2009 to serve his motherland. As a water activist and an expert,he contributed in developing the policies on ambitious programs like ‘Inland River Navigation in India’, ‘Making River Ganga Aviral and Nirmal’, ‘Interlinking of Rivers in India’, and ‘Recharge of Ground Water with Ridge to Valley Approach’, etc. He also contributed to the ‘National Water Policy 2012’ of the Government of India.

From May 2015 until January 2019, he worked as the 'Chairperson’ of ‘Rajasthan River Basin and Water Resources Planning Authority’ with State Minister rank during which he implemented state’s flagship water management program “Mukhyamanthri Jal Swavalamban Abhiyan” (MJSA) and constructed about 4 lakh water harvesting structures in the state resulting in average increase of groundwater levels by five feet in twenty one non-desert districts of Rajasthan. Designed by him, the ‘Eastern Rajasthan Canal Project’ for Interlinking of Rivers in Rajasthan would meet 100% drinking water needs of the 13 eastern districts of Rajasthan and would irrigate 10 lakh acres apart from providing water to Delhi-Mumbai Industrial Corridor (DMIC). He also designed the IT driven ‘State Water Grid’ master plan for the State.