Home Other Indian State News Vice President said the Media should introspect and the marginalized voices should... 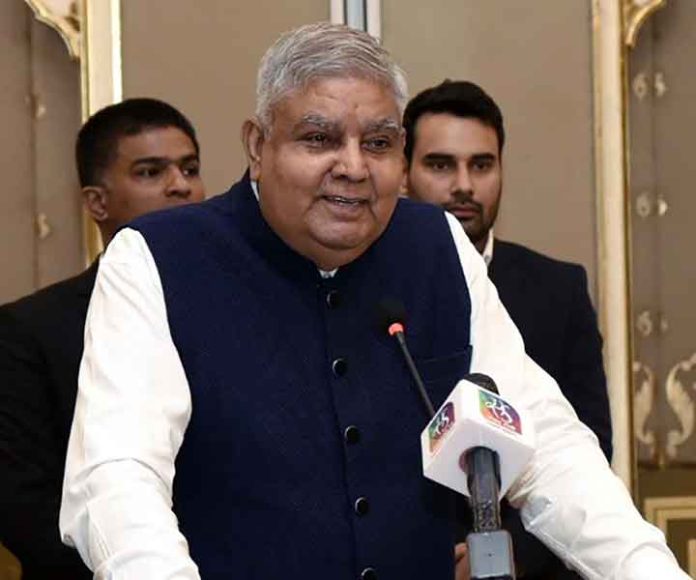 The Vice President, Shri Jagdeep Dhankhar today called for strengthening the thriving space for discussion and dialogue in public realm, suggesting that ‘intolerance of others’ point of view is antithetical to the vision of free exchange of thought’.

Recalling that India has a great heritage of debate, discussion and knowledge sharing, the Vice President said that lessons can be drawn from the past to uplift the quality of discussions in public domain, especially legislatures.

Shri Dhankhar added that in the ‘race for one-upmanship and under the constant glare of the public eye, debates – televised or on social media – are turning into cacophonous fighting arenas’. He called upon media to take the initiative, introspect, “pass on the mike and let unique, original and marginalized voices come to the mainstream”.

Calling for healthy, open-minded discussions, the Vice President said it is “time to step out of our echo chambers – caused by both social structures and social media algorithms – and let our mind breathe”. “We must revive the art of listening; we must rediscover the art of dialogue”, he stressed.

The Vice President was inaugurating the third edition of a national colloquium ‘Lokmanthan’ organized by Prajna Pravah in Guwahati today. Appreciating the organizers for highlighting the rich cultural ethos of North Eastern India, Shri Dhankhar observed that in their diversity, “the cultural practices of the region resonate with the quintessential Indian values of peace, harmony and universal brotherhood”.

Addressing the gathering, the Vice President underlined the role of intelligentsia in Indian society, referring to how sages advised kings historically on issues of policy and ensured harmony and stability in society. Calling upon intellectuals to speak upon prevailing issues, he said that “if our intelligentsia decides to opt for silence in the current times, then this very important section of society is bound to be silenced forever. They must freely practice dialogue and deliberation so that societal morality and propriety are preserved”.

Underscoring the primacy attached to Freedom of Expression in the Constitution and the rich quality of Constituent Assembly debates, the Vice President said that they are a testimony to the importance of free-spirited and healthy discussion that India has long cherished. “Freedom of expression is the nectar of democracy”, he said.

The Vice President called upon the intellectuals from the civic society to play a proactive role in ensuring the harmonious balance of the three branches of the state – Legislature, Executive and Judiciary – through deliberative mechanisms. “Democratic values and human rights will certainly blossom with intelligentsia adopting proactive stance of dialogue and discussion”, he added.

Reflecting on the “common cultural thread” among all Indians, Shri Dhankhar observed that the beauty and strength of ‘our ‘indubitable cultural unity’ reflects in every facet of our national life. Right from the mundane, secular matters to the lofty spiritual aspects – from the songs sung by farmers during the sowing season to our holistic approach towards environment – the underlying oneness of Bharatiyata can be felt’.

In this regard, the Vice President called for developing “a sense of our own history, which includes folk traditions, local art forms and innumerous dialects. Only then can we be truly independent in mind and spirit”. He also called for empowering the youth to think for itself and be equipped with “not only with the right skill set, but also with the right mindset”.

During the event, the Vice President witnessed a traditional Assamese religious dance performance, ‘Gayan Bayan’. He also released two books – a souvenir for Lokmanthan and a collection of speeches of the Chief Minister, Dr. Himanta Biswa Sarma, titled ‘In Pursuit of a Dream’.

Later in the day, the Vice President reached the Raj Bhawan, Guwahati where he interacted with eminent personalities from the state. Thereafter, Shri Dhankhar along with his spouse, Dr. Sudesh Dhankhar visited the renowned Kamakhya temple in Guwahati and offered prayers.