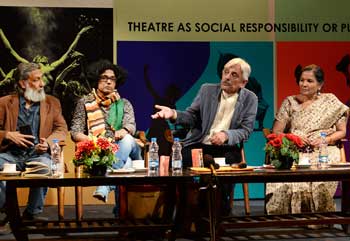 In Bharat Rang Mahotsava’s Allied events, National Seminar was organised to discuss on various issues. Chaired by Mr. Parvez Akhtar and the panel held Mr. Ranjeet Kapoor, Mr. Makarand Sathe and Dr. Ganesh Chandanshive, topic for discussion in the first session was Theatre as a Social Responsibility or public need. For the second session the topic was A space for performance and performance for space, this session was presided by Mr. Bhanu Bharti and speakers for the session were Prof. Robin Das, Ms. Bhagirathi Bai Kadam and Ms. Shailaja J.

“Theatre is a representation of a society and representation of their aspirations,” Mr. Parvez Akhtar started the seminar with his words of wisdom. Welcoming the panellists, the first spokesperson who addressed the audience was Mr. Ranjeet Kapoor. While addressing the gathering he started that at first, he did not want to be a part of theatre but destiny entwines us so well that he ended up being at National School of Drama and became a writer. He concluded with a fact that, “It is the situation and text that dictates the theatre, where it should happen and its purpose. Mr. Makarand Sathe and Dr. Ganesh Chandanshive also addressed the gathering.

In the second session Mr. Bhanu Bharti started the conversation with explaining importance of space he said that, “Science explains there are four dimensions not three, as time is also a dimension and to conceive space without time is not possible.”

Directors of Bhikhari Naama (Dir. Jainendra Dost), Banjara (Bhavai) (Dir. Paija Pranjivan Babubhai), Damini Hay (Dir. Meghnad Bhattacharya) and Khwahish Gali (Dir. Hari Shankar Ravi) took the centre stage today at Meet the Director. Plays from yesterday all portrayed a struggle each one of a different kind. The first play discussed was Banjara where water was a part of the central theme elucidating on how it is a gift of nature to us. Damini Hay gives a sliver of hope in these hopeless times teaching an important lesson to never give up and fight. An age long tradition of expressing through dance and music was brought on stage. Khwaaish Gali a complex drama is a NSD Diploma production that seems so simple in its presentation was last to be discussed.

A Brahmin family is passing through the forest where the exiled Pandavas are dwelling. The family encounters Ghatotkacha who is in search of a human for his mother Hidimba’s meal. He holds the family captive and asks them to decide who should accompany him. The eldest son of the family being dear to the father, and the youngest to the mother, the middle son is the only choice left to be handed over to Ghatotkacha. Being the middle one he is called ‘Madhyama’. Madhyama is thirsty and requests Gatotkacha to be allowed to go to a nearby pond for water. Ghatotkacha agrees and asks him to return quickly. But Madhyama gets delayed and Gatotkacha starts calling out to him, “Madhyama…Madhyama…”  Bhima, who was passing by, and he too being the middle son (Madhyama), thinking that someone is calling out to him, reaches where the family is being held captive. On hearing the story of the family, he offers himself as Hidimba’s meal, on the condition that Gatotkacha defeats him in a duel. Gatotkacha defeats Bhima in a wrestling bout and takes him to his mother only to discover that Bhima is his father.

In this play an hour takes us inside the heads of Asha, Kalpana and Bina as they pit themselves against their torturer, Zafar, who has the power to decide their fate in the jail. Eventually Asha will be placed in a gas chamber. Asha’s resistance and ability to turn the tables on her torturer provide one of the most compelling stories. The central question of the play relates to what someone should sacrifice for their relationships, dignity and political affiliation. Asha’s story is a searing tale of survival as she, along with her fellow prisoners, struggles to hold onto her disintegrating sense of self.

Loose Woman is about the travels of a woman – into and out of herself. To make this show, a performer, a video & sound designer, and a singer, through a series of improvisations, ‘looked for her’ in different places, in different manifestations. The stories that emerged were given an episodic form. They each stand alone, though a loose thread connects them all. We see her at home getting ready for office and then, on a whim, stepping out of her cab and disappearing altogether. In ‘Dancer’ she discovers what it means to not walk the straight and narrow but to ‘side-step’. ‘The Line’ jolts her into the realization of how precious her own looseness really is. And so on…

She looks for, she muses, she discovers the possibilities of ‘looseness’ in her life – of new directions she can create. The very ground beneath her seems to shift when she reacts with objects and characters from the world around her. She rediscovers her own mother. Even Gandhi enters her universe.

With humour, yet serious introspection, Loose Woman has been conjured, coaxed and driven by different mediums – theatre, sound, dance and the camera. Of course, the underlying reference here is to the heavy irony in the throwaway expression ‘loose woman’, whose application is rampant in a skewed familial and social setting crafted by just one sex.

For the purposes of this show, though, she’s not loose enough….not yet!

The process of this collaboration started with reading aloud the poetry of Pash in Hindi and Punjabi. A piece without any script or characters but with people, a site and the words of Pash. Sieving through poetry and oscillating from selection to rejection of the text multiple times; engaging with protest music; reading critical material written on Pash; and staying with the site for long hours, the idea of this piece was to revel in what would emerge when people come collectively to produce a performance on the poetry of Pash. On developing a scene on poetry, the performers were wary of not getting into plain recitation or a visualisation of the written word. There was an attempt to delve into the how, why and what is Pash communicating through his poems; its significance in the times we live in being a crucial aspect of the play.