in the feeding and social welfare programs which will make a huge impact on  reducing malnutrition in our country. This was stated during stakeholders meeting at the launch of a “White Paper on the Soy Nutrition” in Le Meridien, Delhi  today by USSEC,  Soybean Processors Association of India (SOPA) , Soy Food Promotion & Welfare Association (SFPWA) in coordination with National Institute of Nutrition, Hyderabad.

India suffers from a high burden of malnutrition across  the spectrum of age, sex and socio economic background. The Public Distribution system (PDS), Integrated Child Development Services (ICDS)  and the mid - day meal (MDM) programmes are some of the programmes that

role in improving nutrition status of millions of urban and rural  population in India.

Dr Ratan Sharma, Director, India Soy Food Programme, US Soybean Export   Council (USSEC) said that soy is an outstanding source of low cost and high  quality protein. It has highest protein density among all plant protein  sources. Its protein quality is comparable to meat, milk and egg protein quality  delivering all essential amino acids in right proportion for  different age groups as prescribed by FAO and WHO, and it can be easily added to traditional dishes and cuisines throughout the country.

soy can play an important role to reduce the malnutrition consequences in  our country. It is an less expensive source of high quality protein with other important nutrients, minerals and vitamins and it can play a key role to combat the malnutrition in India as it increases muscle mass and weight, improves brain development, increases stamina, improves immunity, reduces fatigue and improves the overall health.

He further elaborated that in the year 2000, the US Department of  Agriculture issued a ruling that soy protein can provide 100% of protein required in school lunch programs, replacing animal protein. As per Dr. Sharma, Indian population is predominantly vegetarian. Our diet

is lacking in terms of quantity and quality of protein. Even the majority  of non-vegetarians among us do not consume animal products on a daily basis in quantities sufficient to provide the recommended amount of protein. He further stated that Starting in 1935, Mahatma Gandhi became interested in soybeans as a source of low cost, high quality protein in the vegetarian  diet he advocated. Dr. Sharma pointed out that our immediate requirement is to bridge the protein gap in India, and soy should be the lead protein  source to bridge this gap.

Dr. T Longvah, Director, National Institute of Nutrition, ICMR said that whitepaper would act as the road map for the future prospects of improving food and nutritional security. He thanked all the participants who helped in preparing the whitepaper so informative and easy to understand. He mentioned that, the global soy food demand is expected to grow by many folds in the coming years. It can be included in many existing nutrition intervention programmes. Soybean is a rich source of good quality protein and the cost is too low.  Besides nutritional benefits, there are reports that soybean also provide several therapeutic benefits too. Soybean is one of the very few plants that provide a high quality protein with minimum saturated fat.

The issue of mainstreaming soy into existing Govt. supplementary programmes is not in the purview of NIN, Hyderabad. For the purpose, all the stakeholders need to sit together and take a decision on its inclusion in these programmes. 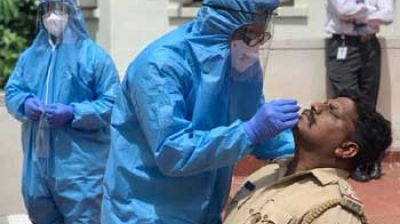 COVID-19 outbreak has become a defining point of our generation...

IPN extensive reach and partnerships with over 4,500+ schools in...

Need for tech based, real time monitoring of Immunization data