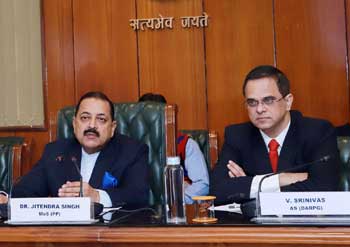 INVC NEWS
New Delhi,
India and Gambia have agreed to work out a Memorandum of Understanding (MoU) on refurbishing personnel administration of Gambia. The Department of Administrative Reforms & Public Grievances (DARPG) and National Centre for Good Governance (NCGG)will extend technical assistance and develop a collaboration through an MoU on Refurbishing Personnel Administration of Gambia. This was conveyed by the Union Minister of State for Development of North Eastern Region (I/C), Prime Minister’s Office, Personnel, Public Grievances & Pensions, Atomic Energy and Space, Dr. Jitendra Singh during talks with a delegation from the Gambia Public Service Commission. The 11-Member delegation, led by the Vice Chairman, Public Services Commission of Gambia, Mrs. Awa Auber, is on a visit to India from December 02-6, 2019. The objective of the visit is to study Best Practices in Public Management relating to Performance Management System, Recruitment Management System and Civil Services Pension Scheme.

Dr. Jitendra Singh said India has unveiled several sweeping administrative reforms in the last five years under the leadership of the Prime Minister Shri Narendra Modi. This includes fixing Minimum Pension, innovation in Pension hikes for senior citizens at 80 and 100 years of age, scrapping Interviews at lower level recruitment and getting feedback of retiring employees under the “Anubhav” scheme. He offered to share with Gambia India’s experiences and Best Practices in Good Governance. Dr. Jitendra Singh said Gambia can adopt the e-Recruitment, Performance Appraisal and Pension models that have been introduced in India.

Dr. Jitendra Singh said the Union Public Service Commission (UPSC) is universally acclaimed for its efficient and transparent process of Civil Services recruitment. The Government is also considering feasibility of setting up the National Recruitment Agency, he added.

Dr. Jitendra Singh said India and Gambia have common history of colonial rule and are still young nations. He said India is willing to step up cooperation with Gambia in Refurbishing of Personnel Administration which is an integral part of administrative reforms for Good Governance. The contours of the collaboration would be deliberated by DARPG and NCGG officials with the visiting delegation from the Gambia. The objective would be to replicate the Best Practices in Personnel Administration of India to the Gambia.

Earlier, welcoming the delegation, Additional Secretary, DARPG, Shri V. Srinivas said they will have opportunity to visit UPSC, and learn about Civil Services Recruitment. The delegation will also visit the Staff Selection Commission (SSC) and get training on Subordinate Civil Services Recruitment. Among other programmes, they will visit UIDAI, Passport Sewa Kendra and Delhi Metro. An Interactive Video Conference session has been planned with Chairman, Right to Public Services Commission of Government of Maharashtra.

The Gambia delegation also interacted with Secretary,DoPT,Dr. C.Chandramouliand  Additional Secretary, DARPG, Shri V.Srinivas on Performance Management System. Dr.Chandramouli said that the Best Practices in Personnel Administration in India are represented by the focus on ethics and accountability in Governance with focus on online portals for time-bound performance appraisal, statutory constitutional institutions for recruitment like the UPSC and SSC and the zero tolerance approach to corruption. He further said that India’s digital footprint is visible in many aspects of governance and the JAM trinity of Jan Dhan, Aadhar and Mobile has effectively brought transparency to many Government schemes through Direct Benefit Transfers to bank accounts of beneficiaries. The whole objective of good governance is to reduce the interface between Government and Citizen by enhanced use of technology.