Home Other Education University should be a repository of knowledge 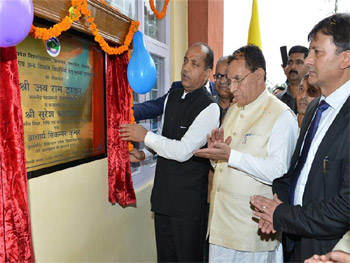 INVC NEWS
Shimla,
The state government would take up the matter with the government of India for declaring Himachal Pradesh University (HPU) as Central University so that it could get adequate funds for development and expansion.  This was stated by Chief Minister Jai Ram Thakur while presiding over the 50th Foundation Day of the HPU, here today.

He also dedicated and laid foundation stones of developmental projects worth Rs 8.20 crore in the University.

The Chief Minister while congratulating the teachers, students and non- teaching members on this occasion said that this University was established with a specific aim to empower the people of Himachal Pradesh through educational process by undertaking teaching, research and outreach programmes and it is heartening to see that the it has succeeded in its endeavour.

Jai Ram Thakur said that the University should be a repository of knowledge, an instrument of dissemination of knowledge and promoting the traditions, values enshrined in Indian heritage and tradition, for which the teachers should come up with new ideas and concepts. The state government is committed to provide adequate infrastructure in the University so as to facilitate the students. He said that due to topographic constrains, the University campus was not well planned and organized. He emphasised that proper planning and research must be done before executing developmental projects so that maximum benefits could be derived.

He said that the opinion of the world community has changed towards India due to the able leadership of Prime Minister Narendra Modi. He said he recently visited a few European nations to attract investment for the State and the meetings with the potential investors were fruitful as several entrepreneurs have shown interest to invest in the State.

The Chief Minister said that the state government would provide all possible help for establishing new campus at Ghanahatti as well as for expansion of other activities of the University. The government would ensure that autonomy of the University was maintained at any cost. He said that teachers should also come forward to check the menace of drug abuse amongst the youth of the State.

The Chief Minister released University newsletter “Himshikhar”, research journals, souvenir and other publications and books on the occasion.

He honoured Padamshri Dr. Omesh Bharti for his contribution in providing cost effective treatment of rabies on the occasion.

Chief Minister inaugurated University Model School (Phase-III) completed at a cost of Rs. 1.56 crore, the library for visually challenged and other students constructed by spending a amount of Rs. 25 lakh and the network jointly established by the HPU and Space Tele-infra Private Limited completed by spending Rs.1.50 crore.

Education Minister Suresh Bhardwaj said that the HPU has created a special place for itself due to the hardworking teachers, students and other staff. He said that since its establishment in 1970, the University has produced several alumni who have brought laurels to the University and State. The State Government under the dynamic leadership of Chief Minister Jai Ram Thakur was committed to provide quality education to the youth of the State. The State Government has established Higher Education Council in the State to ensure quality higher education to the students. He said that Rs 400 crore have been earmarked by the Union Government for research activities in the country.

Dean of Studies Prof. Arvind Kalia detailed the achievements of the University during the year 2018-19 on the occasion.

Registrar of University Ghanshyam Chand presented vote of thanks.