Home Research & Analysis Businesses R & A United States Microgrid Marketto grow at a CAGR of 9.31% until 2026 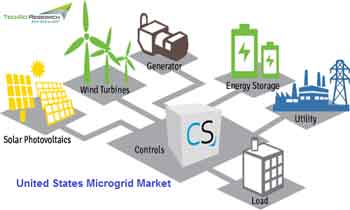 According to TechSci Research report, “United States Microgrid Market, By Type (Grid Connected, Remote/Island, Hybrid), By Consumption Pattern (Urban & Metropolitan, Semi-Urban, Rural/Island), By Power Source (Natural Gas, Diesel, Solar PV, Fuel Cell and Others), By End User Industry (Educational Institutes, Military, Utilities, Industrial, Healthcare and Others), By Region, Competition, Forecast & Opportunities, 2016-2026F”, the United States Microgrid Marketis forecast to grow at a CAGR of 9.31% to reach USD2774.04million by 2026. Growth in the market can be attributed to frequent natural disasters in the country such as tornados, hurricanes, and earthquakes followed by tsunamis that may destroy parts of the transmission and distribution infrastructure. These events lead to interruption of the connection to the utility grid that results ininterruption in power supply for weeks or even months. Since a microgrid does not depend on the power supply of the utility grid, the immediate deployment of microgrids appears feasible in some areas, especially those that have been repeatedly struck by natural disasters and can be planned and assembled in a comparatively short timeinstead of waiting for the reparation and reinstallation of the common transmission and distribution infrastructure after a natural disaster.In addition to natural disturbances, there are certain man-made disturbances like terrorist attacks or wars, the physical damage to power system components such as transmission towers or transformers, that may lead to large outages. Increased activities ofcyber-attackslike intentionally wrong remote switching operations also cause damage if sensitive communication channels do not meet cyber security requirements.Being in a geographically limited area, the microgrid generation and load, as well as load balance, are controlled by reliable electronic components that can disconnect from the utility grid and run in “island” mode if required. The probability that a microgrid will be shut down due to natural disasteror human error is very low. All these factors are accelerating the growth of theUnited States Microgrid Market.

The United States Microgrid Market is segmented on the basis of type, consumption pattern, power source, end user industry and region. Based on consumption patten the market can be segment into urban & metropolitan, semi-urban, rural/island. The urban & metropolitan will have the highest share in the forecast period due increasing construction activities and infrastructure development that will need more reliable power supply and will ultimately spur the growth of United States Microgrid Market. However, the rural/island segment is the fastest growing segment because of increasing power projects in rural areas and government’s focus onproviding uninterrupted power supply.

The United States Microgrid Marketbased on end user industry can be segmented into educational institutes, military, utilities, industrial, healthcare and others. The industrial segment is the fastest growing segment due to the rising commercial and industrial activities in the country. According to the United States Department of Energy the power outages in the country costs American businesses around USD150 billion per year. Hence microgrids are being deployed in the commercial and industrial sector to prevent business from running out of electricity and continue their operation with uninterrupted power supply.

“Microgrids are being utilized to further develop resilience and reliability of electrical networks,to deal with expansion of distributed clean energy resources like wind and solar photovoltaic (PV) generation to reduce fossil fuel emissions, and to supply power to remote locations that cannotbe dependent on power grid, such as an island community orcommunity far away from the electricity grid. The desirable characteristics provided by microgrid such as clean power, resilience and reliability is expected to create profitable opportunities for the growth of the United States Microgrid Market.Moreover, growing demand for uninterrupted power, along with growing construction activities and infrastructure development in the country and increasing power resiliency in industrial and commercial sector are going to drive the market.”,said Mr. Karan Chechi, Research Director with TechSci Research, a research-based global management consulting firm.

India Online Learning Market To grow at a promising rate During the Forecast Period : TechSci Research