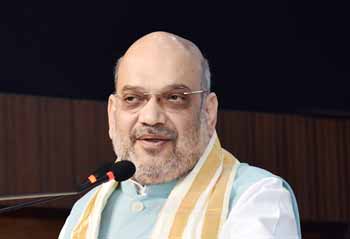 Addressing a public rally in Jind, Haryana; Union Minister for Home Affairs Shri AMit Shah said that with the removal of Article 370, the Government has fulfilled Sardar Patel’s dream of a united India. This was a step that previous governments did not take, but now, with this step taken, Kashmir becomes an integral part of India. Shri Shah said that the Government of the day has fulfilled the dream of former Prime Minister Shri Atal Bihari Vajpayee ji with the abrogation of Article 370.

He also said that the abrogation of Articles 370 and 35A is a big step forward for the unity and integrity of India. Moreover, this step has removed all obstacles in the path of holistic development of Jammu and Kashmir and Ladakh. Shri Shah emphasized that such a courageous step can be taken only by those who think in terms of national interest. Shri Shah praised the removal of Article 370 by 370 votes as a historic one by the Parliament.

Shri Shah further praised PM-KISAN scheme, which provides minimum income support up to ₹6,000 per year to all farmers. He also applauded the Government’s pension scheme for small retail traders as an unprecedented step. Speaking on the newly created Jal Shakti Mantralaya, Shri Shah said that the creation of such a ministry will harmonize and coordinate all efforts for water conservation and water resource augmentation.

Praising the Haryana Government’s successful efforts to reverse the decline in sex ratio, Shri Shah said that Shri Manhoar Lal Khattar Government’s successful implementation of Beti Bachao Beti Padhao has led to an increase in the state’s sex ratio from 871 to 918 in three years. Shri Shah commended the Haryana Government for ensuring increased remuneration for ASHA and aanganwadi workers. He also hailed the government’s decision to increase remuneration to the families of martyrs from rupees 20 lakh to 50 lakh. He congratulated Shri Khattar for ensuring 24×7 state-wide availability of electricity and the successful implementation of the policy of providing two times the MSP to farmers.