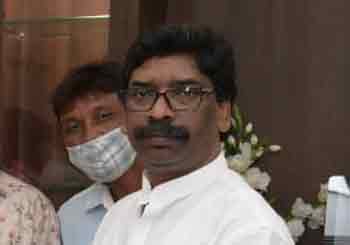 INVC NEWS
Ranchi,
Chief Minister Shri Hemant Soren and Welfare Minister Shri Champai Soren will felicitate the students of the Marang Gomke Jaipal Singh Munda Scholarship Scheme and their parents at a program to be organized in Ranchi on Thursday, 23 September.

The Marang Gomke Jaipal Singh Munda Scholarship Scheme has been rolled out by the State Government for the students of Jharkhand from the schedule tribe category to pursue higher studies in the universities of England and Ireland. The awardees of the scholarship are entitled to a complete coverage of tuition fees along with living and other miscellaneous expenses. Under this scheme, every year 10 students will be selected from the Scheduled Tribes category residing in Jharkhand. For the first cohort of the scholarship, 6 students have been selected, who are going to begin their study programmes in 5 different universities of England in September.

Government announced the plan in December 2020
The scheme was approved by the State Government in a cabinet meeting held on 28 December 2020. The Marang Gomke Jaipal Singh Munda Scholarship Scheme was inaugurated by Chief Minister Shri Hemant Soren during the 1st year anniversary program organized at Morhabadi Maidan, Ranchi on 29 December 2020. Applications were invited from prospective students of the scholarship scheme on 7 March 2021. This year 6 students were selected for receipt of a scholarship to study in England.

Apart from this, Anjana Pratima Dungdung has been selected for MSc at the University of Warwick and Priya Murmu will pursue an MA in Creative Writing and the Writing Industries at Loughborough University.

Under the scheme, these students coming from the Scheduled Tribes category will be provided full cover of Tuition fees, living, journey and other expenses.

Helping tribal students in higher education, a commendable step by the government…Other students from the tribal community will get inspired to move forward said one of the selected student.

I see Jaipal Singh Munda Overseas scholarship as an enabler for the tribal intellects and scholars to be at par with the students at an international level, says Hercules.

Akanksha says it’s overwhelming to be a part of this programme. I am grateful to the Government as they thought of taking this step to empower and encourage students to pursue more in their life. Also, this would be a great opportunity for us to represent our culture on a global platform and also represent the actual meaning of the phrase, “unity in diversity”.

“I am glad to be a part of the first cohort of Marang Gomke Jaipal Singh Munda Scholarship Scheme.  I believe that it is a very important step by the government to help tribal students pursue higher education through this scholarship.  This will not only allow tribal students to showcase their talent on the global stage, but also pave the way for progress for others around, said Anjana Pratima Dungdung, a resident of Gumla district.

In the memory of our scholar, leader…our respected Marang Gomke Jaipal Singh Munda Ji, our government has started this scheme.  This is the first such scheme in the country and Jharkhand is the first state in the country to give scholarships to the students of tribal society to study abroad.  We hope that in the coming days, other students will also get inspired from them, the tribal youth will represent our culture, our values, our rich legacy and our society on the world stage and will bring glory to Jharkhand and the rest of the country.

Hemant Soren, Chief Minister
Our government is committed to ensuring higher education facilities for the tribal students. This is the reason that work is being done to bring this unique opportunity with this scholarship scheme. My Best wishes to all the students going abroad for higher education. I wish them all a bright future ahead.

Retirement age of government employees can be 63 years