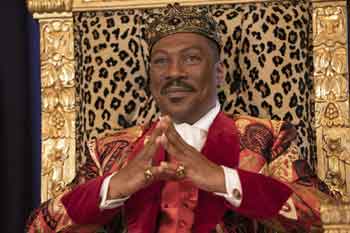 Starring the comedy king Eddie Murphy, Coming To America (1988), was one of the greatest hits back in the day and emerged into a cult classic. More than three decades later, the film is still loved by many and continues to have a special place in the hearts of all those who love watching a film with a heavy dose of humour. The film, which catapulted Eddie into being one of the greatest comedians the world has ever seen, is back with its sequel, titled Coming 2 America. Directed by Craig Brewer, Coming 2 America will premiere globally on March 5th 2021 exclusively on Amazon Prime Video in over 240 countries and territories.

Talking about one of the most anticipated comedies of the year, director Craig Brewer said, “The real benefit of making a sequel to a classic like Coming To America more than 30 years later is that you get into the territory of your characters having lived lives.” Craig saw the original film, his grandmother’s favorite, in theaters as a teenager.  On what people might expect from the sequel, he continued, “With Akeem (Eddie Murphy), he’s watching his kids grow up and have their own opinions and also, he now carries the weight of being the king of his own castle. I knew those were interesting elements that we could bring to the story, along with the laughter. What might surprise many people is that there’s a lot of heart and soul to the movie.”

Set in the lush and royal country of Zamunda, newly-crowned King Akeem (Eddie Murphy) and his trusted confidante Semmi (Arsenio Hall) embark on an all-new hilarious adventure that has them traversing the globe from their great African nation to the borough of Queens, New York – where it all began.

The Amazon Original Movie is all set to release globally on March 5th 2021, while the original title Coming To America is already available on the service for streaming.