Then India would have been a dry desert

The Vice President of India, Shri M. Venkaiah Naidu called for making nature’s conservation a people’s movement and appealed to all citizens, especially the youth to actively take up this cause.  Speaking at a webinar on the occasion of Himalayan Day, the Vice President called for rethinking our development paradigm in such a way that human beings and nature co-exist and thrive together.

Shri Naidu further said that the Himalayas are an invaluable treasure house and emphasized the need for their protection and preservation. He also called for a pan-Himalayan development strategy based on the region's natural resources, culture and traditional knowledge.

Drawing attention to threat of degradation faced by the fragile Himalayan ecosystem, the Vice President stressed that development should not be at the cost of the environment.

Frequent natural calamities are a result of our carelessness towards the nature, he added.

Highlighting the ecological, economic and cultural importance of the Himalaya, the Vice President said that in the absence of these mountains, India would have been a dry desert.

These mountain ranges not only guard our country from the cold and dry winds coming from Central Asia but also cause most of the rainfall in northern India by acting as a barrier for the monsoon winds, he said.

Further highlighting the contribution of Himalayan Ecosystems, Shri Naidu said that with more than 54,000 glaciers these mountains are the source for 10 major river systems in Asia, a lifeline for almost half of humanity.

He also drew attention to the immense hydropower potential of the Himalaya which could make it a reliable source of clean energy thus reducing the carbon emissions.

Expressing concern over the increasing rate of melting of Himalayan glaciers due to global warming, the Vice President said that this would severely affect the lives of over one billion people who depend on it for water – for their drinking, irrigation and energy needs.

“We cannot continue with this kind of disregard for nature. If we neglect or over-exploit nature, we are putting our future in danger”, he warned.

Describing the conservation of nature as our ‘culture’, he appealed to respect nature and preserve culture for a better future.

Talking about the various government programs for the conservation of Himalayan ecology such as ‘National Mission for Sustaining the Himalayan Ecosystem’ and ‘SECURE Himalayas’, Shri Naidu stressed that our developmental approach should be sustainable.

Drawing attention to the fact that local communities are dependent on forests for their agriculture and basic needs, the Vice President called for creating a development model that maintains balance between economic activity and the pristine environment of the region.

This is important not only for Himalayan states, but for the future of all North Indian states dependent on rivers originating from there, he added.

Suggesting that the organic agriculture may be the best way forward in a fragile ecology, the VP appreciated the states such as Sikkim, Meghalaya and Uttarakhand that have made strides in this direction.

He appealed to governments, scientists and universities to find solutions to the challenges faced by the farmers in adopting organic farming.

Calling tourism as an important route to economic development in the Himalaya, Shri Naidu called for an ecosystem-based approach for tourism which is sustainable in long term.

Signifying the ecological and spiritual importance of Himalayas, the Vice President said that tourists come to these majestic mountains for both its natural beauty as well as for holy pilgrimages.

He called for creating awareness among the tourists as well as locals about the problem of pollution, litter and solid waste affecting most high Himalayan tourist sites. “People need to understand that if the environment degrades, tourism will also be impacted”, he said.

On this occasion, he was also virtually presented the copy of a book titled “Sansad Mein Himalaya” written by the Education Minister, Dr. Ramesh Pokhriyal Nishank.

The Vice President also appreciated the efforts of by green activists such as Shri Anil Prakash Joshiji who have been working towards the development of environmentally sustainable technologies for agriculture and livelihood of people in the region. 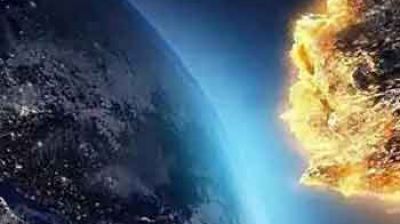 South Asia is one of the hardest-hit regions with climate...

It would definitely encourage people to stay fit and healthy

This attitude goes against the grain of our 5000 years...

We must create a Sashakt Bharat, a Swabhimani Bharat, and...