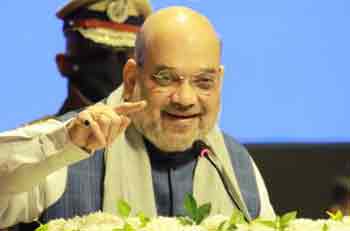 The Union Home Minister Shri Amit Shah, while visiting the Delhi Police Headquarters in New Delhi today, paid homage to the brave Corona Warriors of the Delhi Police who laid down their lives for the welfare of society and the nation. On this occasion, Shri Amit Shah honoured the Corona Warriors of Delhi Police and also presented ranks to policemen who were promoted out of turn in recognition of their outstanding work. Short films ‘2020 ka safar’ and ‘Vijaypath – kahani khaki yoddhaon ki’ were screened on the occasion. The Union Minister of State for Home Affairs, Shri G. Kishan Reddy, Union Home Secretary Shri Ajay Kumar Bhalla, Director of Intelligence Bureau, Shri Arvind Kumar and Delhi Police Commissioner Shri SN Srivastava and many senior officers of the Union Ministry of Home Affairs and Delhi Police were present during the function.

In his address, the Union Home Minister said that the year 2020 brought many challenges but Delhi Police faced every challenge very well. Whether it was the riots in North East Delhi, or the Lockdown, Unlock or the return of migrant labourers to their homes or the farmers agitation, the Delhi Police has come off with flying colours in all tests. Praising the work done by the Delhi Police during the Corona pandemic, Shri Amit Shah said the force played an exemplary role during the Lockdown, including surveillance from drones, providing medicines to the elderly, feeding labourers and transporting pregnant mothers to hospital. During this pandemic, 7,667 policemen were also infected and 30 Corona Warriors martyred, but the Delhi Police never ever wavered. Expressing heartfelt gratitude to all the personnel and officers of Delhi Police, the Union Home Minister said that this endeavour will always be written in golden letters in the history of the Delhi Police. Shri Amit Shah said the world’s largest vaccination programme has been started under the leadership of Prime Minister Shri Narendra Modi and our challenge will conclude only when mankind achieves complete victory over Corona. We cannot rest comfortably until every needy person gets vaccinated.

Calling upon the Delhi Police to set their targets on the completion of 75 years of India’s Independence in 2022, Shri Amit Shah said every Police Station and all police personnel, from Constable to the Police Commissioner, should set their targets for 2022. He said every organization and each police personnel will have to set five goals and resolutions for themselves and they will also monitor its progress themselves. The Union Home Minister said this would be the biggest improvement ever and nothing will come in the way of improving public perception about the Delhi Police and solving the problems of the capital. Shri Amit Shah also said that if 130 crore people make this resolution, then it will spur a greater momentum towards development of the country.

Shri Amit Shah said a very important MoU has been signed between the National Forensic Science University and Delhi Police. Shri Shah said the National Forensic Science University was established when Shri Narendra Modi was the Chief Minister of Gujarat and he was the State’s Home Minister. It was a very ambitious dream of the Prime Minister to establish the world’s first Forensic Science University in Gujarat. Shri Shah also said that crime control does not simply mean just apprehending the criminal, they should also get the harshest punishment which is possible only when forensic and scientific evidence is placed before courts. The Union Home Minister said that he had talks with Chief Ministers of several states and they all want to set up Affiliated Colleges of the National Forensic Science University in their respective states. Many people want to make different fields of forensic science a center of excellence in their areas, this will provide a skilled manpower in the field of forensic science within the country and only then can we turn forensic science evidence as legally compulsory in all criminal cases. The Union Home Minister also expressed happiness over the agreement between Delhi Police and Delhi-based Indraprastha Institute of Information Technology, saying that its main objective is to make the procedure and functioning of the police transparent and efficient by applying IT in policing.

Shri Amit Shah said efforts will be made to prepare a comprehensive framework keeping in mind new challenges so that Delhi can also be made a Safe City. He said a world-class data center of the Delhi Police, linking more than 15,000 cameras would be set up in Delhi and these cameras would directly help the headquarters in crime control. In the coming days, all cameras at railway stations and those installed by the Delhi government will be linked to the data center. This will prove to be a huge effort in making Delhi a Safe City.

The Union Home Minister said the Delhi Police has done a commendable job by reuniting more than 55 missing children with their families within three months. Shri Shah said when the law and order situation within a state is good, only then the pace of development gets boosted and the reality is that even an ordinary constable of the Delhi Police is the backbone of the entire machinery of the nation’s development, bear this always in mind. He said police welfare is also being taken care of. Efforts are being made to double the housing satisfaction ratio from about 19 percent to 40 percent. Under this, Rs 230 crore has been allocated to buy around 800 DDA flats in Narela. The police is also constructing more than 700 houses for its personnel. The proposal of 500 MIG flats which are ready at a cost of Rs 467 crores has also been approved.

Celebration of Glorious Global Success and Felicitation of ROTON’s Technocrats

BJP high command is continuously focusing its attention on Telangana

The 18,000 km journey will revive the immortal saga of unsung martyrs as well as inculcate the spirit of patriotism in the youth