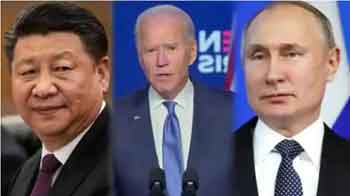 The international community’s response to President Xi Jinping’s address at the 20th Party Congress in Beijing has been lukewarm, with the Chinese power generally saying that the Chinese powerhouse failed to move beyond rhetoric while addressing its national and international concerns. The world expected more from Xi, disappointed him, but China watchers say the Congress was an opportunity for the president to consolidate his power, his party and his role in the country, and nothing more. His speech, much shorter than his speech at the 19th Party Congress, is being turned into a paragraph and will soon be the subject of academic research to uncover any hidden meaning. But there are none.

One of his opening remarks was against the reality of the deteriorating Chinese economy and the general unrest of the people, which was reflected in the display of protest banners that surfaced in Beijing.

People have adopted the party’s new principle for the new era, the core socialist values ​​are resonating with the public, fine traditional Chinese culture is undergoing creative transformation and development, cultural events are flourishing, and online There has been a continuous improvement in the environment. All this has brought about massive and fundamental changes in the ideological landscape of China.

Xi really hides the country’s biggest problem in his speech. There are dual problem areas, a growing population of the elderly and the infirm, as well as a declining population, and the fact that young Chinese are not taking advantage of the government’s relaxation of childbearing policies to fuel population growth. He summed it up in a short paragraph:.. 1.04 billion people are covered by basic old age insurance, and 95 percent of the population is ensured by basic medical insurance. Timely adjustments have been made in the delivery policy.

The president seeks to divert global attention from the utter failure of the Belt and Road Initiative (BRI) project, which has nearly wrecked the financials of many Chinese banks due to poor lending. He tries to paint a positive picture of the project: as a collaborative effort, the Belt and Road Initiative has been welcomed by the international community as both a public interest and collaboration platform. China has become a major trading partner for more than 140 countries and regions, leads the world in total volume of merchandise trade, and is a major destination for global investment and a leader in outbound investment.

There is no reference to the fact that China has ongoing disputes, all initiated by it, that it has land or sea borders with several countries, including India. Instead, Xi says something no one believes in: China respects the sovereignty and territorial integrity of all countries. It lives up to the principle of equality of all countries, whether big or small, strong or weak, and rich or poor, and it respects the development path and social order freely chosen by all the peoples of the world.

He is equally reticent on the forcible sins of Uighur Muslims and other religious minorities. We have effectively controlled ethnic separatists, religious extremists and violent terrorists and made significant progress in combating and eliminating organized crime. We have responded effectively to major natural disasters. The Peaceful China Initiative has entered a new phase.

The president makes a feeble attempt to include China in the international community, seeking its place in the high table of global relations, but once again, finds no takers for his argument. We have demonstrated China’s sense of duty as a responsible major country, actively participating in the reform and development of the global governance system and engaging in all-round international cooperation in the fight against COVID-19. All this has seen us gain wide international recognition. China’s international influence, appeal and shaping power has grown markedly.

On China’s monetary policy, Xi talks about trading on its national currency, which is already well known. We will promote the internationalization of the RMB in an orderly manner, engage ourselves deeply in the global industrial division of labor and cooperation, and strive to maintain the diversity and stability of the international economic scenario and economic and trade relations.

The Chinese president demonstrated his determination to get his way only by referring to US support for Taiwan and the island nation, which refuses to be part of mainland China. Taiwan is the Taiwan of China. The resolution of the Taiwan question is a matter for the Chinese, a matter that must be resolved by the Chinese. We will continue to strive for peaceful reunification with the greatest sincerity and utmost effort, but we promise never to abandon the use of force, and we reserve the option to take all necessary measures. It is directed entirely at interference from outside forces and some separatists seeking ‘Taiwan independence’ and their separatist activities; It is in no way aimed at our Taiwanese compatriots. PLC/GT