Home Other Indian State News The search for faces has intensified on 3 seats in BJP and... 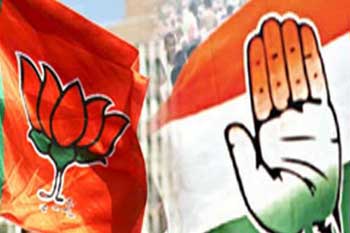 For the Rajya Sabha elections to be held on June 10 next month in MP, the search for faces has intensified on 3 seats in BJP and Congress. Two seats are set to go to the BJP’s share for the Rajya Sabha, while one seat will be with the Congress. In the BJP, a meeting of the central leadership will be held in Delhi to finalize the name on both the seats. According to the current equations in the BJP, one seat can go to the share of the central leadership, but the state organization has felt that both the seats should be with the state.

The BJP organization has started looking for faces for the Rajya Sabha seat. Union Minister Piyush Goyal’s name is the strongest among the contenders. Before this, Union ministers have been sent from the state to 3 seats of Rajya Sabha. The emphasis of the state organization is to send a Dalit face from one seat and a general or OBC from another. If the Hindutva card is played, then the name of Jaibhan Singh Pawaiya may come up suddenly. There are also names of Kailash Vijayvargiya, Lal Singh Arya and Kavita Patidar.

Exercise started in Congress too – Tankha’s name ahead, Ashok, Bala also in race

Senior advocate Vivek Tankha’s name is almost fixed in the Supreme Court on behalf of Rajya Sabha member from Congress. In the midst of heated politics regarding OBC reservation in the state, the name of senior leader Ashok Singh has come in the discussion. Singh has contested the Lok Sabha elections for three times before the Gwalior Lok Sabha, but he had to face defeat. If Singh is sent to the Rajya Sabha, the possibilities of Congress’s strength in the Gwalior region will increase. Along with this, the name of senior MLA Bala Bachchan is also discussed.