Home Entertainment Art & Artist The scrolls will be taken to different parts of the country... 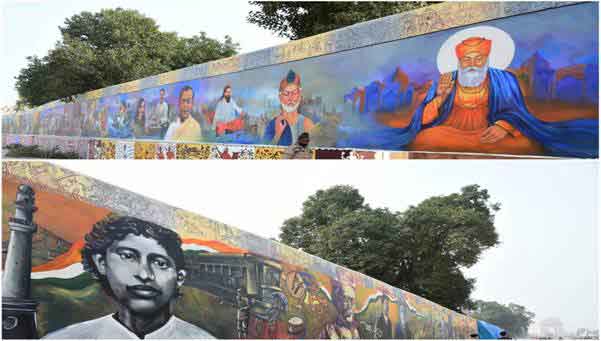 The gigantic and spectacular scrolls created underthe unique initiative ‘Kala Kumbh’ have now been installed at the Rajpath for the Republic Day 2022 celebrations. The scrolls adorn either side of the Rajpath and present an awe-inspiring view. Secretary, Culture, Shri Govind Mohan today visited Rajpath and inspected the installations.

These scrolls analyse the potential of art as a means to express National pride and excellence with varied forms of art from diverse geographical locations of the country. These have been diligently researched upon and painted enthusiastically by more than five hundred artists who participated in special workshops or ‘Kala Kumbh’ at two locations, Odisha and Chandigarh.

Briefing mediapersons, Shri Govind Mohan said that as we celebrate Azadi Ka Amrit Mahotsav, the 750 m long scrolls are a unique initiative of Ministry of Culture and Ministry of Defence. The magnificent scrolls have been painted by local artists drawn from different regions and largely portray the tales of valour of unsung heroes of freedom struggle, he added. The varied art forms of these artists are also reflected in the scrolls which have been brought together on a single platform in the true spirit of Ek Bharat Shrestha Bharat, the Secretary explained. Sh. Govind Mohan further said that after Republic Day, the scrolls will be taken to  different parts of the country and exhibited there as part of Azadi Ka Amrit Mahotsav. 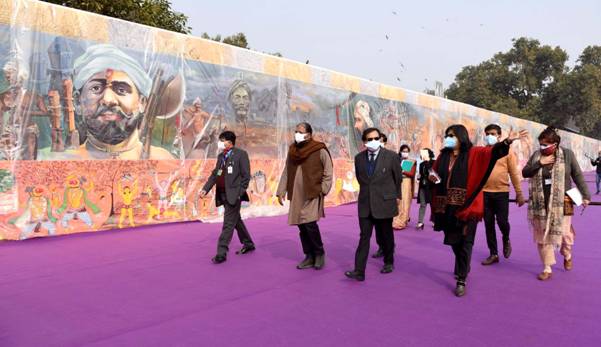 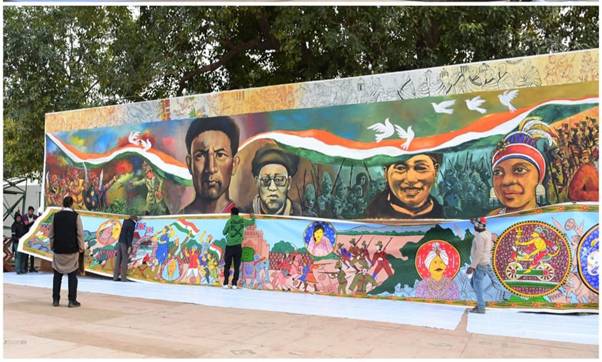 Aligning with the flagship program of the Ministry of Culture, the aspect of collaborations and collective work has been outlined in these workshops. At Odisha , the National Gallery of Modern Art, New Delhi collaborated with Kalinga Institute of Technology and Silicon Institute of Technology in Bhubaneswar from 11th – 17th December and at Chandigarh the collaboration was done with Chitkara University from 25th Dec 2021 – 2nd January 2022.

Kala Kumbh- Azadi Ka Amrit Mahotsav reflects the essence of unity in diversity while also analyzing the initiative of the Government of India to celebrate and commemorate 75 years of progressive India and the glorious history of its people, culture and its achievements.

The celebration of true essence of Ek Bharat Shresth Bharat was visible in these workshops where the rich diversity of our country in its cultural aspects was witnessed while portraying the heroic lives and struggles of unsung heroes of India’s freedom movement.