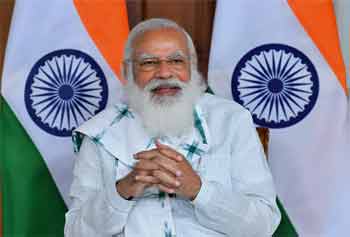 INVC NEWS
New Delhi,
The Prime Minister Narendra Modi addressed ‘Janaushadhi Diwas’ celebrations through video conference. He dedicated to the nation the 7500th Janaushadhi Kendra at NEIGRIHMS, Shillong during the event. He interacted with beneficiaries of Pradhan Mantri Bhartiya Janaushadhi Pariyojana. Stakeholders were recognized by the Prime Minister for their excellent work. The Union Ministers Shri D. V. Sadananda Gowda, Shri Mansukh Mandaviya, Shri Anurag Thakur,  Chief Ministers of Himachal Pradesh, Meghalaya, Deputy Chief Ministers of Meghalaya and Gujarat were present on the occasion. More than 10 Union Ministers and 100 Member of Parliaments have attended Jan Aushadhi Diwas celebration, across India and watched the live interaction of Prime Minister with the beneficiaries of Jan Aushadhi  Kendra owners.

The Prime Minister interacted with beneficiaries, Kendra Sanchalak, Jan Aushadhi Mitras at five locations i.e. Shimla, Himachal Pradesh;  Bhopal, Madhya Pradesh; Ahmedabad, Gujarat; Maruthi Nagar, Diu and Mangalore, Karnataka. Interacting with the beneficiaries, the Prime Minister requested them to adopt a healthy lifestyle. He told them that due to affordability, patients are taking the required medicines leading to better health outcomes. He praised the youth promoting the Janaushadhi movement and asked them to help in the ongoing vaccine drive.

The Prime Minister asked the beneficiaries to spread the word about the benefits of Janaushadhi. He said “you are my family and your ailment is ailment of my family members, that is why, I want all my countrymen to stay healthy.”

Speaking on the occasion, the Prime Minister noted that the Janaushadhi Yojana is becoming a big friend of poor and middle class families. It is becoming the medium of both service and employment.  Dedication of 7500th centre of Janaushadhi at Shillong is an indication of spread of Janaushadhi Centers in the Northeast. The scheme is providing affordable medicine to people in hilly areas, Northeast and tribal areas, Shri Modi noted.  He said that dedication of 7500th center is important as there were not even 100 centres in India six years ago. He asked to achieve the target of 10000 centers. Poor and middle class families are saving about Rs 3600 crore every year on expensive medicines. He said that the scheme is promoting Aatamnirbharta among women as more than 1000 centers are being run by the women.  The Prime Minister remarked that in order to promote the scheme, incentive has been enhanced from 2.5 lakh to 5 lakh with additional incentive of 2 lakh for Dalit, Aadivasi women and people of the Northeast.

The Prime Minister noted that the demand for India made medicines and surgery has increased. Production is also increasing to keep up with the increasing demand. A large number of employment opportunities are also being created. He said that now 75 AYUSH medicines are also available in Jan Aushadhi centers. Patients will benefit by getting AYUSH medicines cheaply and the field of Ayurveda and AYUSH Medicine will also be benefitted.

The Prime Minister said that for a long time, government thinking treated health only as a subject of just disease and treatment. However, the topic of health is not confined to just disease and treatment but affects the economic and social fabric of the country. He pointed out, for a holistic approach to health, the Government has worked on the causes of disease too. He cited Swachch Bharat Abhiyan, free LPG connections, Ayushman Bharat, Mission Indradhanush, Poshan Abhiyan and recognition to yoga to illustrate the holistic nature of the Government approach towards health. The Prime Minister touched upon the UN recognition of year 2023 as International Year of Millets. He stressed the need to promote coarse grain as it will not only provide nutritious food grain but will also add to the income of the farmers.

Pointing out the enormous burden of medical treatment on the poor families, the Prime Minister said that in the recent years, efforts are being made to remove all types of discrimination in the treatment and medical treatment has been made accessible to  every poor person of the country. For this, prices of essential medicines, heart stents, knee surgery related equipment have been reduced manifold, said the Prime Minister. He said Ayushman Yojana has ensured free treatment up to Rs 5 lakh, for the country's more than 50 crore poor families. So far more than 1.5 crore people have taken advantage of it and saved about Rs 30000 crore.

The Prime Minister lauded the scientist for the Made in India Corona vaccine and said, today India has vaccines not only for local use but also for helping the world. He stressed that the Government specially kept the interest of the poor and middle class in mind for vaccination. The vaccination is free in the government hospitals and private hospitals are charging just Rs 250 which is the lowest in the world.

The Prime Minister stressed on the need for having infrastructure for effective treatment and availability of quality medical staff. He said that the Government has started working on a holistic approach in extending the health infrastructure from primary hospitals in villages to tertiary hospitals and medical colleges like AIIMS.

The Prime Minister recounted the government’s efforts to improve medical setup in the last six years. He informed that in the last 6 years more than 30 thousands seats have been added to 55 thousand MBBS seats that existed in 2014. Similarly, there were 30 thousand PG seats, to which, 24 thousand new seats have been added. 180 new medical colleges have been established in the last six years. 1.5 lakh Health and Wellness centers have been established in villages, 50 thousand of which have already started functioning. These centers are treating serious ailments and making sophisticated tests available locally. Shri Modi noted the enormous increase in allocation for health in the Budget and talked about Pradhanmantri Aatamnirbhar Swastya Yojana for complete solution of the health problems. Every district has provided diagnostic centers and more than 600 critical care hospitals have been established. Work is on for establishing one medical center in three Lok Sabha constituencies, the Prime Minister said.

The Prime Minister said that the effort of the government today is to make the treatment cheaper, accessible for everyone. With this thinking policies and programs are being made today. He added that Pradhan Mantri Jan Aushadhi Project's network spread rapidly and reached as many people as possible.

Speaking on the occasion Shri Gowda said that the Government is bringing a revolution in health sector since 2014. There has been  improvement in accessibility of common people including poor people to affordable healthcare.  He further said that for next fiscal year, Government has proposed allocation of Rs 2.23 lakh crore for health sector which is 137 % higher than that of current fiscal year.

Shri Gowda informed that the number of janaushadhi kendras till the year 2014, was only 86. The strategic interventions of the current Government gave the required impetus to the scheme. As a result of which, 7499 PMBJP Kendras are functional across the country as on date. All the districts of the country have also been covered by the scheme. The product basket of PMBJP products have also evolved from a mere 131 products in the year 2014 to 1449 medicines and 204 surgicals items, he added.

The Minister expressed is happiness in informing that during the difficult time of COVID-19 pandemic, PMBJKs have rendered essential services to the nation. All Kendras maintained their operations regularly and ensured availability of medicines to the citizens.

1st March to 7th march is celebrated as ‘Janaushadhi Week’ across the nation with theme of “Jan Aushadhi – Seva bhi, Rozgar bhi” for creating awareness about use of generic medicines. Various functions across the country are organized like health checkup camps, Jan Aushadhi Paricharcha, Teach Them Young, panel discussions with doctors, etc. in this week.