Home Other Investigation News The number of Cyclones and Number of stations reported very heavy and... 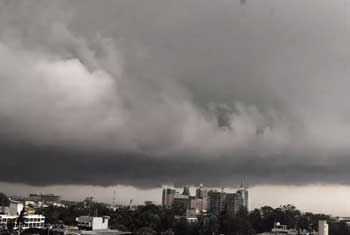 The number of Cyclones and Number of stations reported very heavy and extremely heavy rainfall events have increased in recent years. Also the analysis of past data of cyclones over North Indian Ocean (Bay of Bengal and Arabian Sea) during the period from 1891 to 2020 indicates that, frequency of Very Severe Cyclonic Storms has increased in recent few years over the Arabian Sea. However, the coastal vulnerability to the categories of Extremely Severe Cyclones is more continues over the Bay of Bengal region, as there is no significant trend in the frequency of Extremely Severe Cyclonic Storms (ESCS). On the other hand, the increase in frequency over the Arabian Sea has not posed a corresponding increase in the coastal vulnerability along the west coast since most of such Cyclones forming over the Arabian Sea are making landfall over the coasts of Oman, Yemen etc and hence the threat to Gujarat & Maharashtra coasts remains same. On an average, out of 5 Cyclones developing over the North Indian Ocean (NIO) comprising Bay of Bengal and Arabian Sea, about 3 to 4 of them make landfall causing loss of life and property. Low lying coastal belts of West Bengal, Odisha, Andhra Pradesh and Tamil Nadu & Puducherry are more prone to the impact of these systems. The number of deaths due to cyclones has decreased significantly, as a result of the improvement in the early warning skill by the India Meteorological Department (IMD) under the Ministry of Earth Sciences (MoES) and effective mitigation measures and response actions by National Disaster Management Authority (NDMA) and Ministry of Home Affairs (MHA). Still there is huge loss to property.

Oxygen makes up one-fifth of the air we breathe, and few recent studies reported declining oxygen content in the atmosphere due to burning of fossil fuels, population growth and deforestation. However, the loss of oxygen is negligible when compared to its abundance in the atmosphere and it is also found that the ecosystem is compensating for some of the loss.

Ministry of Earth Sciences has the mandate only to provide forecasts and early warnings. However, as an adaptive measure to minimize the effects of increasing temperatures, IMD in collaboration with local health departments have started heat action plan in many parts of the country to forewarn about the heat waves and also advising action to be taken during such occasions.  Heat action plan became operational since 2013.

The Heat Action Plan is a comprehensive early warning system and preparedness plan for extreme heat events. The Plan presents immediate as well as longer-term actions to increase preparedness, information-sharing, and response coordination to reduce the health impacts of extreme heat on vulnerable populations. NDMA and IMD are working with 23 states prone to high temperatures at present with respect to heat action plan.

IMD has started Forecast Demonstration Project (FDP) on heat waves from April 2017 for the hot weather season under which a detailed daily report including realized data of heat waves, weather systems leading to the occurrence of heat waves, diagnosis on the basis of Numerical Model outputs and forecast and warnings for five days is prepared. This bulletin is disseminated to all concerned including health departments.

From April 2018 onwards, IMD started issuing an additional bulletin on heat wave in the morning (08 a.m.) valid for 24 hours to support the planning of activities for the day and this bulletin is also disseminated to all concerned. All these bulletins are posted to IMD website also, on a special page created for heat waves.

This information was given by the Minister of State (I/C) for M/o Earth Sciences and M/o Science & Technology, Dr. Jitendra Singh