Home Business The medium of education must be in mother tongue up to higher... 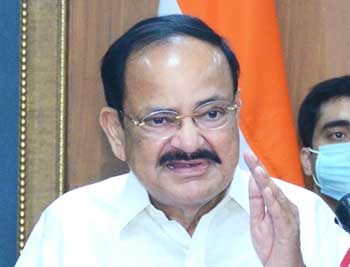 The Vice President, Shri M. Venkaiah Naidu, today called for proactive and concerted efforts to increase the number of translations of literary classics in various Indian languages. In this regard, he suggested leveraging technological advancements in translation to make the rich heritage of regional Indian literature accessible to people in their own mother tongue.

In particular, Shri Naidu praised the efforts of institutions such as Potti Sreeramulu Telugu University in translating classics such as ‘Amuktamalyada’ by Sri Krishnadevaraya into other Indian languages. He called for more such efforts from similar universities to preserve and promote the use of different languages in India.

Addressing the Foundation Day celebrations of the Telugu University, the Vice President lauded the university’s commitment to preserve Telugu language, literature and history through various research initiatives. He paid tributes to the former Chief Minister of Andhra Pradesh, late Shri N.T. Rama Rao, who took the initiative to establish the university. He also appreciated the efforts of the Telangana state government and the Chief Minister, Shri K. Chandrashekar Rao in developing the university and furthering the cause of Telugu language and culture.

Noting that globalisation has had a widespread impact, the Vice President stressed that it must be ensured that the youth must not lose touch with their cultural heritage. Noting the importance of language in forming one’s identity and boosting self-confidence in the youth, Shri Naidu said people must take pride in speaking in their mother tongue.

Shri Naidu observed that the National Educational Policy, 2020, aims at promoting Indian languages and encourages primary education to be in the child’s mother tongue.  He said the medium of education must be in mother tongue up to higher education and for technical courses too.

In this regard, Shri Naidu called upon the universities to undertake advanced research in languages and improve the scientific and technical terminology in Indian languages in order to facilitate their wider reach and use in academia.

Later, Shri Naidu inaugurated the photo exhibition of ‘Ek Bharat Shreshtha Bharat’ at the University, organised by the Ministry of Information & Broadcasting, Government of India. Writing in the visitors book, the Vice President appreciated the efforts of the organizers in showcasing the culture of the paired states of Telangana and Haryana. Encouraging people to visit the exhibition, he wrote that such initiatives will go a long way in propagating the rich cultural heritage of the paired states and promoting people-to-people contacts.