The Institution Builders Of India

Institution Builders is an article on the men with whom I have served with in my 3 decades in the IAS. They are men with extraordinary resilience and conviction who believed that strong institutions are the essential for Indian democracy. They strived for better governance through their institution building efforts.

B.N.Yugandhar IAS (1961) served as Director of the Lal Bahadur Shastri National Academy of Administration (LBSNAA) from 1988 to 1993. He went to serve as Secretary to Government of India in the Ministry of Rural Development, in the Prime Minister’s Office from 1993-97 and as Member Planning Commission from 2004-09. B.N.Yugandhar impressed upon probationers  that “Land is the summum bonum of Rural India”. As Director, he introduced a Land Reforms assignment along with the Village study to provide comprehensive training to IAS probationers on the agrarian economy. As Director LBSNAA, he was a visionary - inspirational and influential, carrying conviction to train officers with high ethical values and deep comitment for the Indian State. In his talks at the Academy he would recount his experiences of implementing pro-poor policies. B.N.Yugandhar deeply influenced IAS probationers to work tirelessly on Land reforms – land ceiling, tenancy reforms and land alienation particularly tribal land alienation. As Member Planning Commission, B.N.Yugandhar contributed immensely to the welfare state policies.

Mitha Lal Mehta IAS (1963) was one of the longest serving Chief Secretaries of Rajasthan. From 1993-97 he was an influential voice in State administration. M.L.Mehta would often  interact with village communities as Chief Secretary.  He chased the dream of  drought moderation in Rajasthan with particular emphasis on water conservation in rainfed  areas. His focus areas included development of watersheds through construction of check dams, promotion of a second crop in rainfed areas, reducing migration and improved management of pasture lands. Post retirement, M.LMehta established the Rajasthan Mission on Livelihoods and continued to work with the poorest sections of the society for employment generation. The compassion he had for the rainfed farmers of Rajasthan who were totally dependent on livestock and seasonal migration for livelihoods was a unique feature in his long years in the IAS.

Dr. Yaga Venugopal Reddy IAS (1964) served as Technical Assistant in the Executive Director’s Office at World Bank Washington DC from 1978-83, as Joint Secretary Department of Economic Affairs and Additional Secretary Commerce from 1990-95, Deputy Governor Reserve Bank of India from 1996-2002. On retirement he went on serve as Executive Director IMF 2002-03 and Governor Reserve Bank of India from 2003-08. In the late 1980’s, Dr. Y.V.Reddy would address IAS aspirants, inspiring them to pursue a career in public service. As Governor Reserve Bank of India, Dr. Y.V.Reddy believed in multilateralism and called for concerted actions from the G7 countries to address macroeconomic global imbalances. He formulated India’s policies on capital account convertibility and ensured an orderly rupee adjustment despite severe global imbalances. He went on to chair the Finance Commission and recommended the highest ever devolutions of central taxes to State Governments.

Dr. S.Narayan, IAS (1965) joined the IAS at a very young age, and had one of the longest stints as Secretary to Government of India.  In the years 1997-2004 Dr. S.Narayan served as Secretary to Government of India in Ministry of Coal, Department of Industrial Policy Promotion (DIPP), Ministry of Petroleum& Natural Gas (MOPNG), Department of Revenue, Department of Economic Affairs and on retirement as Secretary in the Prime Minister’s Office. He handled complex economic policy with consummate ease. Having served with the International Jute Commission in Dhaka he was well versed with multilateralism. As Secretary Petroleum, Dr. S.Narayan strived for dismantling the administered pricing mechanism of petroleum products. Subsequently, in the Ministry of Finance he was part of budget formation for the 2001, 2002 and  2003 budgets, major financial sector reforms in the backdrop of the restructuring of Unit Trust of India and SEBI and amendments in tax policy.

Vinod Rai, IAS (1972) was recommended by the Cabinet Secretary to the Finance Minister for a lateral shift from Cabinet Secretariat to Department of Banking in 2002. The decision was path breaking. One of   India’s most courageous civil servants, Vinod Rai is a man of pleasant demeanor, who understood the essential pre-requisites of better governance. Vinod Rai displayed enormous courage and conviction throughout his career in public finance and banking where he served as Joint Secretary and Secretary for the period 2002-08. Following retirement Vinod Rai served as the Comptroller and Auditor General of India. His contributions as C&AG resulted in comprehensive reforms in coal and telecom sectors bringing transparency and better governance practices.

Dr. Duvvuri Subba Rao, IAS (1972) served as Joint Secretary Department of Economic Affairs and then served as Lead Economist in the World Bank, Washington DC from 1998-2004. His understanding of world bank conditionality  and development financing was comprehensive. On return to India, he served as the Secretary to the Prime Minister’s Economic Advisory Council and then as Secretary Department of Economic Affairs. Following retirement he served as Governor of the Reserve Bank of India from 2008-13 deftly handling the impact of the 2008 Global Economic Crisis on the Nation’s economy.

Dr. Rahul Kullar, IAS (1975) served as Private Secretary to Finance Minister during the 1991 reforms. A brilliant civil servant with a deep understanding of public finance, he served at the Asian Development Bank and then returned to serve as Joint Secretary and Secretary in the Department of Commerce. Dr. Khullar is one of the longest serving  Commerce Secretaries of India.  He handled the complex issues of commodity price volatility adroitly. It was a period when India witnessed sustained growth in exports. Dr Khullar was successful in negotiating a number of bilateral trade agreements  his tenure. He led several rounds Commerce Secretary level bilateral trade talks with Pakistan and Bangladesh, leading a delegation to Islamabad. On retirement, Dr. Khullar held the critical position of Chairman Telecom Regulatory Authority with high distinction.

" I found certain common traits in Institution Builders. They had all served in the Government of India as Deputy Secretaries and then rose to Joint Secretaries and subsequently served with distinction as Secretaries. They were deeply committed to pro-poor policies. Their understanding of India’s Institutions was honed by their long experience in several Ministries in Government of India further boosted by foreign postings. They had the courage, conviction and integrity to take decisions in critical challenging times. They also had the capacity to engage with the political leardership in coherent policy discussions. Individually they contributed  immensely to building strong Institutions which are the bulwark for better governance of the Indian democracy."

V.Srinivas is an IAS officer of 1989 batch, presently posted as Chairman Rajasthan Tax Board with additional charge of Chairman Board of Revenue for Rajasthan

He had previously served in the Ministry of Finance and as Advisor to Executive Director (India) IMF, Washington DC. Also worked as Planning and Finance Secretary of Rajasthan. ______________________ 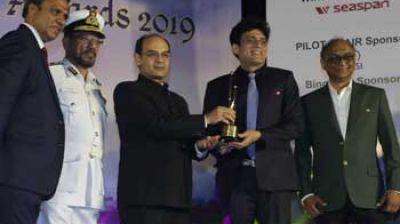 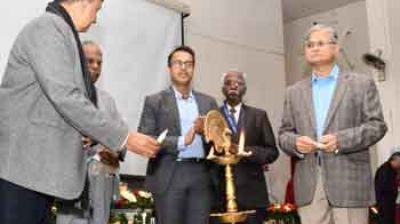 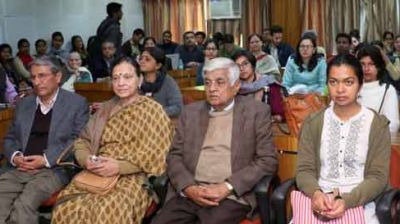 Meritocracy is not the role of education : Prof Krishan...