Home International The Indian Navy Crest has been amended to replace the foul anchor... 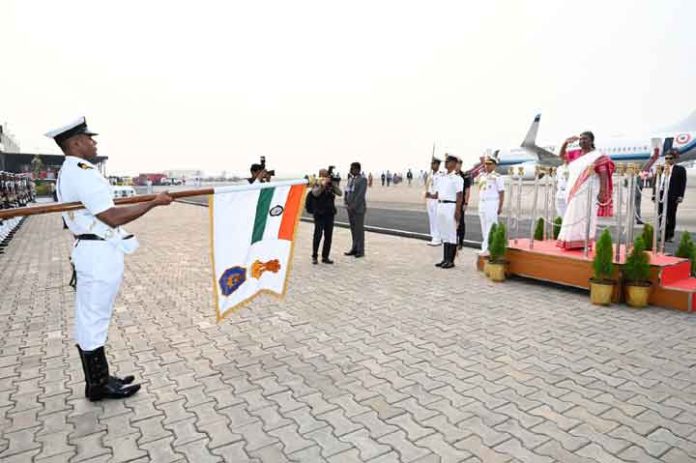 The Hon’ble President of India has approved introduction of a new design for the President’s Standard and Colour and Indian Navy Crest for the Indian Navy, which were unveiled at Visakhapatnam on Navy Day on 04 Dec 2022.

Resonant to the ongoing National endeavour to move away from the colonial past, the Naval Ensign was amended to a new Design that draws inspiration from our history where in the Red Horizontal and Vertical Lines on the White Ensign were replaced with an Blue Octagon with Twin Golden Borders encompassing the National Emblem atop a clear anchor and ‘National Emblem ‘Satyamev Jayate’ inscribed on the stock of the Anchor. Further, the National Flag was retained on the upper left canton.

The erstwhile design of the President’s Standard and Colour for the Indian Navy was instituted on 06 Sep 2017. The design comprised one each horizontal and vertical red bands intersecting at the centre and the National Emblem inserted at their intersection. The National Flag was at the upper left canton adjacent to the staff and a Golden Elephant was at the lower right canton on the fly side. This design was inspired from the erstwhile Naval Ensign.

The Indian Navy adopted a new Naval Ensign on 02 Sep 2022, and the new design of the President’s Standard and President’s Colour awarded to the Indian Navy incorporates this change. The new design of the President’s Standard and Colour comprises three main constituents – the National Flag in the upper left canton adjacent to the staff, the State Emblem underscribed with ‘Satyamev Jayate’ in Golden Colour on the upper right canton on the fly side, and a Navy Blue – Gold Octagon below the Golden State Emblem. The Octagon has twin golden octagonal borders, encompassing the golden National Emblem (Lion Capital of Ashoka – underscribed with ‘Satyamev Jayate’ in blue Devnagri script) resting atop an anchor; and superimposed on a shield. Below the shield, within the octagon, in a golden bordered ribbon, on a Navy Blue background, is inscribed the motto of the Indian Navy ‘Sam No Varunah’ in golden Devnagri script. The Golden State Emblem signifies ‘Power, Courage, Confidence and Pride’ whilst the Navy Blue – Golden Octagon shape draws inspiration from Shivaji Maharaj Rajmudra or the Seal of Chhatrapati Shivaji Maharaj, and represents the eight directions (four cardinal and four inter cardinal), symbolising the Indian Navy’s maritime outreach. The new design of President’s Standard and Colour highlights India’s glorious maritime heritage and also symbolises a powerful, courageous, confident and proud Indian Navy.

The Indian Navy Crest has been amended to replace the foul anchor with a Clear Anchor. The clear anchor depicts steadfastness of the Indian Navy to deter any challenge in maritime domain, and represents clarity in vision, mission and aspirations of its sailors. The Clear Anchor also depicts Indian Navy’s commitment towards securing the Coast and Maritime Interest of India.  The change would imply removal of the symbolic nautical rope in the Crest Designs.  The Modified Indian Navy Crest has been introduced with effect from 04 Dec 22 on the occasion of the Navy Day 2022.

The New Naval Crest has a traditional naval clear anchor below the Ashoka Lion Head with ‘शं नो वरुणा:’ inscribed below it, which is an invocation from the Vedas meaning ‘May the Ocean God be Auspicious unto us’. The phrase was adopted as the motto of the Indian Navy on the suggestion of Shri Chakravarti Rajagopalachari, the first Indian Governor General of Independent India.  The National Motto ‘सत्यमेव जयते’ meaning ‘Truth Always Triumphs’  is inscribed on the Stock of the Clear Anchor. 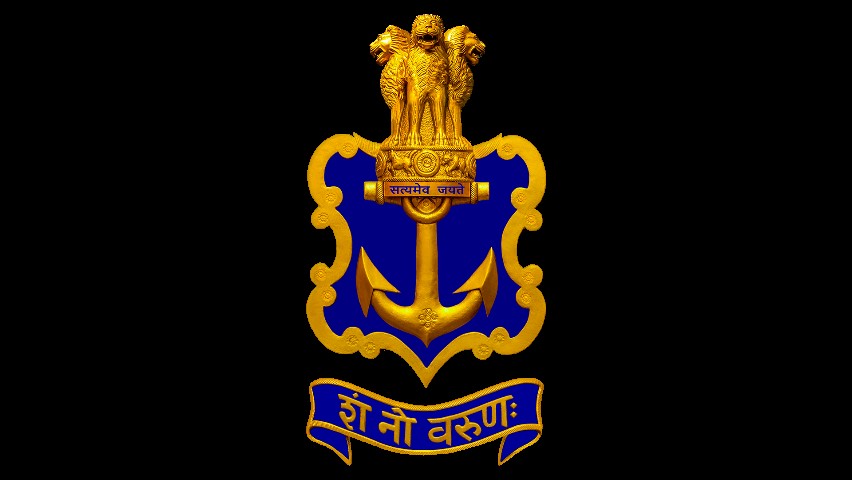