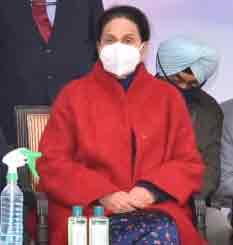 INVC NEWS
Chandigarh,
Terming the Finance Minister Nirmala Sitharaman’s statement in Parliament today, about the government’s commitment towards farmer welfare as ironical, the Member Parliament from Patiala Preneet Kaur said that if the government is really committed to the welfare of farmers, then why is it not listening to the agitating farmers who have been protesting against the 3 farm laws since last two months.

She further pointed out that, “While introducing Budget 2021, the Finance Minister had declared that there has been a significant increase in government expenditure for procurement, as far as wheat, paddy and pulses goes, attempting to show the government’s concern for the welfare of farmers. Yet, it is ironical how the same farmer today sits at the borders of Delhi, agitating, fighting for their rights and genuine demands, a situation quite contrary to what the government claimed in the August house.”

The Patiala M.P. further said that the government needs to immediately repeal the black farm laws if they genuinely care about their commitment towards farmers welfare.

She said that for us, farmers are first and foremost, and their well-being can only be ensured by rolling back the three agricultural laws.

Preneet Kaur further said that in this difficult time the whole of Punjab, Congress party and all like minded people of the country are in support of our farmers and will continue to fight for their rights until the draconian farm laws are repealed.