As many as 200 families of the marginalized Kumhar community from 20 villages in Gandhinagar and Ahmedabad took a stride towards sustainable self-employment today by associating with Kumhar Sashakrikaran Yojana of Khadi and Village Industries Commission (KVIC). Union Home Minister Shri Amit Shah distributed 200 electric potter wheels (chaak) and other pottery equipment to 200 trained artisans at a function held at Village Randheja in his Parliamentary Constituency of Gandhinagar  in Gujarat via video conference from New Delhi.

Of the 20 villages identified by KVIC, 15 villages fall under Gandhinagar district while remaining 5 villages belong to Ahmedabad district. The distribution of electric potter wheels will benefit at least 1200 members of the community by increasing their productivity and their income, which is the dream of  Prime Minister Shri Narendra Modi.

Shri Amit Shah lauded the various self-employment schemes of KVIC like Honey Mission, Kumhar Sashaktikaran Yojana, Leather Artisans’ Empowerment and Project DigniTEA. While distributing electric chaaks, the Home Minister interacted with four potters, namely - Saileshbhai Prajapati, Bharatbhai Prajapati, Avniben Prajapati and Jigneshbhai Prajapati - who have been given 10-days training by KVIC in pottery making and provided with electric chaak and other equipment. These potters thanked the government saying this will enable them earn a better livelihood and become “Aatmanirbhar”.

Shri Amit Shah said the electric chaak will not only help potters to enhance their production but also enable them to make new fancy products that will fetch them good income during the Dussehra and Diwali festivals. He urged every beneficiary to rope in at least 10 other families with Kumhar Sashaktikaran Yojana for the larger benefit of the community.

“Empowerment of the Kumhar (Prajapati) community by improving their socio-economic condition has been the dream of our Hon’ble Prime Minister. KVIC’s Kumhar Sashaktikaran Yojana is aimed at making potters “Aatmanirbhar” by creating sustainable local employment for them while preserving the heritage art of pottery. It is important that young potters take up the art of pottery and expand it across the country,” Shri Amit Shah said.

He said the government has created proper marketing channels including tie-up with the Indian Railway for selling their products. “Indian Railway has already designated 400 railway stations where only earthenware is being used to sell food and beverages. I will request the Railway Minister to identify more such railway stations so as to provide a bigger marketing platform to our potters,” he said, while also advising the potters to form cooperatives to sell their finished products at railway stations.

KVIC Chairman Shri Vinai Kumar Saxena, said he was readily available for every initiative taken for the cause of the poor and the marginalized sections.

Saxena informed that more than 18,000 electric chaaks have so far been distributed across the country benefiting nearly 80,000 people of the community. He said the average income of potters under Kumhar Sashaktikaran Yojana has gone up from nearly Rs 3000 per month to nearly Rs 10,000 per month.

Notably, several regions of Gujarat, particularly Kutch and Saurashtra, are well-known for the traditional pottery art. Since the launch of Kumhar Sashaktikaran Yojana in 2018, the KVIC has trained nearly 800 potters in Gujarat. KVIC has also distributed them with electric potter wheels and other equipment like blunger machines for mixing of clay. This has eliminated drudgery from the process of pottery making and also resulted in increasing the production by 3-4 times.
Read the full article
Tags: amit shah

Only a united and determined India can overcome this pandemic 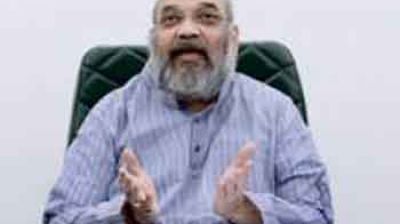