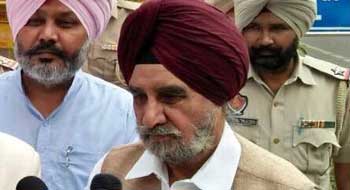 Mr. Bajwa informed the Union Minister that the environmental and geographical conditions of Punjab are more suitable and adaptable for buffaloes than other milch animals for setting up of the Centre of Excellence for research and breed improvement of Buffaloes would benefit the dairy farmers manifolds by adding their income, said  Bajwa.

Likewise Mr. Tript Bajwa put up demand for 100% subsidy for the state of Punjab under RGM (RASHTRIYA GOKUL MISSION), for Development and conservation of indigenous bovine breeds,Genetic upgradation of bovine population and enhancement of milk production and Productivity of bovines.

Mr. Bajwa demanded 100 percent funding from the central Government under Establishment of Veterinary Hospital and Dispensary (ESVHD-MVU) Scheme to purchase 70 Mobile Veterinary Units for Punjab to provide door to door emergency services to the livestock farmers.

He demanded funds required for production of sex sorted semen at  A – Grade Semen Station Nabha through Mobile Sex Sorting Units for the production of Sex Sorted Semen doses for use in cattle and Buffaloes. This will drastically check numbers of male calves born and control stray cattle menace in years to come.

Mr. Bajwa also appealed to the Union Minister to approve and release the required funds under Rashtriya Krishi Vikas Yojna (RKVY ) for the project to be  submitted to GoI for Repair and Renovation of 100 Veterinary Hospitals and 100 Veterinary Dispensaries in Punjab.

Mr. Bajwa strongly demanded from GoI to provide100% financial assistance to the Dairy Farmers of the State for insurance cover up to 20 cattle buffaloes and upto 100 sheep/goats/pigs on unit basis.

Mr. Tript Bajwa informed that the Punjab Goverment has already requested the GoI to include dairy machinery under SMAM (Sub-mission of Agriculture Mechanization) because there were specific machines and technologies which are exclusively used in the dairy sector viz. Silage Making Machine (Balers) Bulk Milk Coolers, Total Mixed Ration Machine, Milking Machines, Milking Parlor, Automatic Milk Dispensing Unit etc., which if provided on subsidized cost can help a lot to promote modern dairy practices in the State.

Mr. Bajwa added that Keeping in view regarding considerations for the importance of livestock contribution in the GDP of the state urged for special 100% GoI scheme for the new construction of veterinary hospitals and veterinary dispensaries in the state.

Mr. Rupala has given consent to most of the proposals put up by Mr. Bajwa. Union Minister also directed the concerned authorities to resolve the other pending issues at the earliest.