The Dialogue should translate into a working programme to address women’s needs : Maneka Gandhi

INVC, Delhi, Ms Kathleen Stephens, Charge d` Affaires of US Embassy in New Delhi today called on Smt Maneka Sanjay Gandhi, Union Minister of Women & Child Development. Both sides discussed the issue of empowerment of women as a global issue as well as the common concern of increasing number of incidents of crime against women. Mrs Maneka Gandhi stated that her government is seized of the matter and that all possible steps are being taken to address the issues. She enumerated the steps like one-stop crises centres being set up in each of the districts across the country which will have attached to it a panel of police, lawyers, a trained 24 hour caretaker, nurses, counsellors, a rescue vehicle to attend to women in distress. Other steps include introducing the concept of foster care for children being introduced for the first time in India and adoption reforms through the Juvenile Justice (Protection & Care of Children) Bill, 2014 which has been introduced in the Parliament, Mrs Gandhi added. The Minister said that she has personally written letters to Chief Ministers of all the states to have at least 33% women in police force. Ms Kathleen Stephens offered to extend the US cooperation to women in the field of infrastructure, institutionalize approaches and bring about change in attitude towards bringing empowerment to women. To give effect to this cooperation, both sides agreed to hold a high level Women`s Empowerment Dialogue by the end of this year. Mrs Maneka Gandhi said that the Dialogue should translate into a working programme to address women’s needs and to find practical ways to assist them. It should comprise of committed NGOs from both sides, she added. Both sides agreed to have an immediate round of meetings to finalise details of the Dialogue on Women’s Empowerment
Read the full article
Tags: Union Minister for Women and Child Development Maneka Sanjay Gandhi The Dialogue should translate into a working programme to address women’s needs : Maneka Gandhi Charge d' Affaires of US Embassy to India Kathleen Stephens

Now the thrust should be to move faster

Good For Women. Good For India. Good for You. 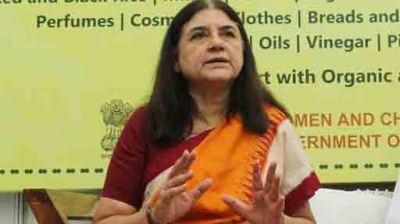 Women are the torchbearers of the nation's organic movement