Home Business The consultation processes on different tracks have already started and are running... 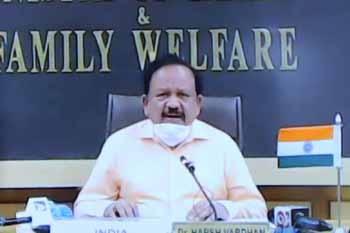 In the context of India’s 5th national Science, Technology, and Innovation policy, STIP 2020,the Office of the Principal Scientific Adviser to the Government of India (Office of the PSA) and the Department of Science and Technology (DST) has initiated a decentralized, bottom-up, and inclusive process for the formulation of a new STIP 2020.

To make the policy true to its essence, DST is initiating “In Conversation with” – a series of exclusive interactions with thought leaders from across the country to share their ideas and vision for the policy and the nation’s Science, Technology and Innovation ecosystem, at large.

The series is being inaugurated by Dr. Harsh Vardhan, Minister of Science and Technology on Friday, 28 August 2020; He will be in conversation with Prof. Ashutosh Sharma, Secretary, DST.  It will be the first conversation of the series, streamed live on Science Policy Forum YouTube Channel.

The DST invites all stakeholders  to be a part of this unique interactive event. Also, one can use #ChatWithDrHarshVardhan followed by questions on DST and Science Policy Forum’s social media platforms, prior to the event.

The fifth S&T policy of India is being formulated at a crucial juncture when India and the world are tackling the COVID-19 pandemic. This is only the latest among the many important changes in the past decade that have necessitated formulation of a new outlook and strategy for Science, Technology, and Innovation (STI). As the crisis changes the world, the new policy with its decentralized manner of formation will reorient STI in terms of priorities, sectoral focus, the way research is done, and technologies are developed and deployed for larger socio-economic welfare.

The Science, Technology and Innovation Policy (STIP 2020) has been flagged off jointly by the(Office of PSA) and DST as India and the world reorient in the wake of the COVID-19 crisis. The new policy is expected to be released later this year, replacing the existing policy, which was formulated in2013.

The STIP 2020 formulation process is organised into 4 highly interlinked tracks: Track I

involves an extensive public and expert consultation process through Science Policy Forum – a dedicated platform for soliciting inputs from larger public and expert pool during and after the policy drafting process. Track II comprises experts-driven thematic consultations to feed evidence-informed recommendations into the policy drafting process. Twenty-one (21) focused thematic groups have been constituted for this purpose. Track III involves consultations with Ministries and States, while Track IV constitutes apex level multi-stakeholder consultation. For Track III nodal officers are being nominated in States and in Ministries, Departments and Agencies of Government of India for extensive intra-state and intra-department consultation and for Track IV consultation with institutional leadership, industry bodies, global partners and inter-ministerial and inter-state consultations represented at the highest levels are being carried out.

The consultation processes on different tracks have already started and are running in parallel.

The six-month process involves broad-based consultations with all stakeholders within and beyond the scientific ecosystem of the country –including academia, industry, government, global partners, young scientists and technologists, civic bodies, and general public.

A Secretariat with in-house policy knowledge and data support unit, built with a cadre of DST-STI Policy fellows, has been set up at DST (Technology Bhavan) to coordinate the complete process and interplays between the four tracks.