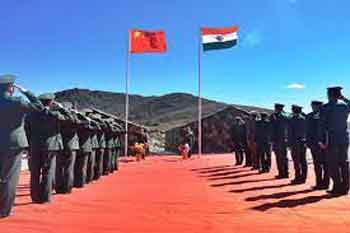 The Modi government at the Center said that Indian and Chinese troops have started withdrawing from the patrolling pillar (15) in the Gogra-Hotspring area of ​​eastern Ladakh. The armies of both the countries are in a state of confrontation in the area since April 2020.

A joint statement issued by the Defense Ministry said that on September 8, in accordance with the consensus reached in the 16th round of the India-China Corps Commander level meeting, Indian and Chinese troops in the Gogra-Hotsprings (PP-15) area in a coordinated and planned manner. According to both the countries, this is a favorable step for peace in the border areas.

According to the report, the 16th Corps Commander-level talks were held on July 17 this year on the Chushul-Moldo border on the Indian side. With the retreat in PP 15, the armies of both countries have now withdrawn from Pangong Tso, PP 14, PP 15 and PP 17A, where the conflict had previously been located.

However, other contentious issues related to the border still remain between the two countries and the Chinese military still blocked access to the traditional patrolling areas of Indian forces along the Line of Actual Control (LAC) in Depsang plains and Charding Nala areas. .

The important decision comes ahead of next week’s meeting in Uzbekistan, where Chinese President Xi Jinping and Indian Prime Minister Narendra Modi are expected to attend.

On efforts to defuse tension, both the countries said that this step will help in maintaining peace along the border. However, when Chinese Foreign Minister Wang Yi visited India in April this year, China also sent a proposal to India about the withdrawal of troops from patrolling point 15 in the hot spring area of ​​Galwan in eastern Ladakh.

Significantly, the proposal was rejected by India after due consideration. PLC/GT