The ‘Eat Right India’ movement initiated by FSSAI under the aegis of Ministry of Health & Family Welfare has been creating awareness amongst the people about safe, healthy and sustainable dietary habits. To achieve this end and to convert the program into a people’s movement, FSSAI recently announced the Eat Right Challenge, an annual competition for 197 Districts and Cities in a unique way to strengthen the food safety and regulatory environment, build awareness among the consumers and urge them to make better food choices. The Food Safety Commissioners and district officials such as District Magistrates and Designated Officers of the cities also joined in the online workshop.

Releasing the ‘Eat Right Handbook’, a useful reference guide for officials to adopt and scale-up Eat Right India (ERI) initiatives in their respective jurisdictions, Dr. Harsh Vardhan said, “Food is not only about hunger or taste but about health and nourishment. The workshop is unique in that it brings big restaurant chefs to roadside eatery owners under the same umbrella to achieve a single goal.”

Addressing the officials of the 197 cities and districts present, he highlighted the pressing need for the campaign. He stated that of the 135 crore people inhabiting India “196 million are victims of chronic hunger while another 180 million suffer from obesity. 47 million children have stunted growth while another 25 million are wasted. 500 million are deficient in micro-nutrients and 100 million suffer from food-borne diseases.” This movement will sharpen our focus towards prioritising food, nutrition and awareness about out eating and dietary habits to prevent and address these challenges, he added. This will also bring into sharper focus the problem of food wastage and disposal of food.

Reminding everyone present of Prime Minister’s commitment of creating a New India by its 75th year of independence in 2022, the Union Health Minister said, “The Prime Minister initiated Swachh Bharat Abhiyaan on the 2nd of October, 2014 to rid the country of diseases arising out of poor sanitation. Through the Jal Jeevan Mission aims to provide potable piped waterwhich will aid in prevention of water borne illness in the country while the Ujjwala Yojana provides access to clean fuels to tackle smoke and lung diseases.” Highlighting the importance of Poshan Abhiyaan, Anaemia Mukt Bharat and Fit India movement, he added that they are “cornerstones of Prime Minister’s New India by 2022.” The main focus of the Ayushman Bharat Health & Wellness centres is on preventive, positive and promotive health, the Minister stated. The HWCs form an integral component of the Prime Minister’s vision of a healthy India, he added.

Dr Harsh Vardhan further spoke of the key role played by healthy food and nutrition in combating morbidity. Stating that diet helps in building one’s resilience and immunity towards various kinds of diseases, he emphasised “61.8% deaths from non-communicable like diabetes, hypertension, cardiovascular complications etc., are directly or indirectly related to faulty diet. Even communicable diseases like tuberculosis disproportionately affect people who are undernourished. People of the same household have been showing different responses to COVID based on their immunity acquired through nutrition.”

Shri Ashwini Kumar Choubey highlighted “the role of age-old wisdom and traditional Ayurveda in guiding people to right eating practices by categorizing food based on the effect they had on the body.” Quoting from the Bhagwadgita and the Upnishads, he emphasized upon the role of traditional eating habits and plant based food. He asserted that the amalgamation of healthy eating habits and active physical activity will lead to a better and healthy India. 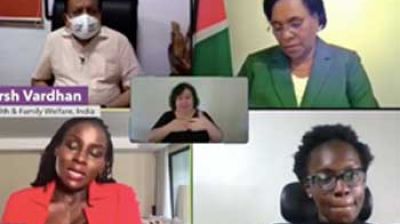