As the city’s fandom reconvened after an epic opening day of the 7th Maruti Suzuki Arena Bengaluru Comic Con at KTPO Trade Centre in Whitefield, the second and final day of the two-day pop culture convention on Sunday, November 18 was host to an array of engaging and interactive activities, sessions, and performances. Along with this, the much-anticipated Cosplay Contest saw cosplayers come in their best creations as attendees rooted for their favourite characters to win the big prize.

Day 2 at the Bengaluru Comic Con was flagged off on the Arena Stage as the team from Radio One hosted a live engagement session with audiences. Delivering on the promise of bringing the best of Indian creators, the second day of Bengaluru Comic Con saw exclusive launches of a number of titles, beginning with the print edition of artist Sumit Kumar’s popular web comic – Bakarmax. This was followed by the launch of ‘Blame it on Rahil’ by Rahil Mohsin, an anthology of his creations so far. Artist and publisher Vivek Goel, founder of Holy Cow Entertainment, also treated comic book fanatics by launching the latest issues from his popular series ‘Caster & The Age of Immortals’. In addition to this, writer Shamik Dasgupta also showcased some of his most popular titles such as ‘Rakshak’ & ‘The Village’ published by Yali Dream Creations.

Returning on Day 2 of the convention, AXN Live R.E.D. hosted a special screening of fan-favourite hit series on the Arena stage, as fans gathered around to catch their most-loved moments from their most-loved shows. The next session saw Vanesa R. Del Rey, the artist of Image Comics’ new series Redlands, speak on the comic and her other works.

Among the biggest attractions during the day was the Comic Con Binge Worthy session with Luke Kenny, VJ, musician, comic book creator, and actor from the recent fan-favorite Indian series, Sacred Games. Luke helmed a fun Q&A session with fans, where he talked about his Rock On days to his stint as a comic creator, his love for zombies and on his recent show, Sacred Games. But that’s not all. Sapan Verma – well-known Indian comedian and co-founder of the ‘East India Comedy’ (EIC) group – performed a special set for audiences at the Arena, where his fellow EIC alum Sahil Shah also performed during the previous day.

As the interactive sessions came to a close, all excited cosplay artists and fans gathered at the Arena for the second and the final installment of the event they look forward to the whole year—the Comic Con Cosplay Contest! Dressed as characters from their favourite comics, movies, and television shows, the event saw an overwhelming number of cosplayers battle it out to win the coveted prize amount of INR 50,000, and a chance to represent the city at the Indian Championship of Cosplay 2019. Nearly every fan attending the event flocked for the contest to the Arena stage, which was a remarkable sight to behold with the array of colours and costumes adorned by cosplayers.

Continuing on the second day were the exclusive experiential & gaming zones from Maruti Suzuki Arena, Sony Pix, Marvel Studios, Aquaman, while the Warner Bros India team hosted a fun, interactive session at the Arena stage to mark the upcoming release of Fantastic Beasts: The Crimes of Grindelwald. Besides, fans got so much more than they expected on the last day of Bengaluru Comic Con, with cosplay makeovers, engaging activities and photo ops with favorite superheroes and characters, a glimpse of the fiction world, and a whole lot of merchandise and goodies.

Speaking on the massive turnout and tremendous response, Jatin Varma, Founder, Comic Con India commented, “The Bengaluru community of fans exceeds our expectations each year as we saw one of the biggest audience turnouts ever. We hope fans and attendees had a great time. On behalf of the entire Comic Con India fraternity, I would like to extend my heartiest thanks to the fans for their continued support for seven years and for helping us make this annual convention truly #TheBestWeekendOfTheYear. Although the event has come to a close promise, we promise to be back next year with a bigger and more exciting event!”

Among the main participants at Maruti Suzuki Arena Bengaluru Comic Con this year were both nationally as well as internationally acclaimed publishers such as DC Comics, Penguin Random House India, Darkhorse Comics, Viz Media, Holy Cow Entertainment and many more. Exhibitors such as The Souled Store, Every Flavour Geeks, Planet Superheroes, Crossword Bookstores, and XP Pen etc. also offered a plethora of exciting merchandise for fans to take home.

As the second day came to an end, fans bid goodbye to their favourite pop culture event with a heavy heart, but knowing that they would have a chance to return for an even bigger and better event in 2019. And with a team as Comic Con India dedicated to creating a platform for fans and exhibitors to celebrate their never-ending love and passion for all things pop culture, one can be sure of that!

Fans got to meet the extremely popular webcomic creator Adam... 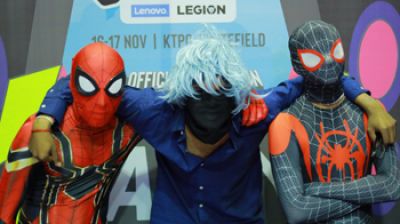 Pop culture fans join in for the coolest Superhero Party

Melody wins tune into the 4th edition of artist aloud...