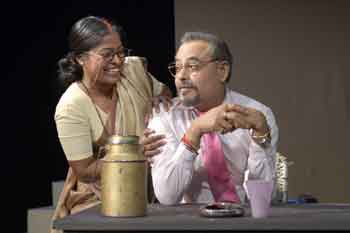 Exploring the twisted path of corruption, bureaucracy, and red tape

Third day of 21st Bharat Rang Mahotsav engaged abundance of footfall. With the buzz of allied performances like Bhangra and Rangbati, theatre plays went houseful. Audience waited patiently till the show began. Students were enlightened by the Directors of the play performed day before. Taj Mahal ka Tender, play performed by NSD’s Director In-Charge, Shri Suresh Sharma became the highlight for the eve when an engineer was called upon by Mughal emperor, Shah Jahan to build the seventh wonder of the world.

Students sitting tight in their seats before time awaiting Director of ‘Mahua ke Paani’, Mrs. Poonam Tiwari, the only Naacha (Chhattisgarhi Folk Dance) artist along the performers, she stressed on the importance of folk. Mrs. Poonam said the art specially the folk, needs to be inherited generation to generation. The young generation along the support of government can keep the existence and importance of folk alive. Explaining the message from play she said, “One should just not see but adapt the message that is given through the art form. This is how the world will become a better place.” Mrs Poonam said, “In our everyday life we get chances to receive or see some good coming to us, but where we fail is adoption of that idea. Like in this play we tried to show the ill-effects and addiction of liquor and its consequences, we hope that one takes back ill-effects and avoid path of alcoholism.”

Priyotamasu: Priyotamasu is a chronicle of ten turbulent months in 1942. Set in a small mofussil town of Central India, the story is woven around a family of affluent Bengali settlers and a group of old or invalidated British officers, who are posted in that town. Away from the swirling passions of time, the two groups closely interact with each other till time overtakes them and the symbiosis is broken.

Taj Mahal ka Tender : Emperor Shah Jahan invites the chief engineer of CPWD, Guptaji and shares his dream of building a monument in the memory of his late, wife, Mumtaz. After much deliberation he comes to the conclusion that a mausoleum be built in her memory and he wants it to be named TajMahal. Guptaji, a shrewd, corrupt, official, entraps the Emperor in the snares of bureaucracy and red-tapism leading to many hilarious situations. The ridiculous bureaucratic procedure takes 25 years only to float the tender notice of TajMahal. TajMahalKa Tender is one of the successful satires of contemporary times.

Kumari And the Beast : Directed by Poonam Tiwari,this play is to encourage the audience to help in getting rid of the increasing dilemmas in the society, build a clean and beautiful nation. It also urges those who are in the grip of an addiction, to give up the bad habit/s so that one’s health, family future generation, and the society does not have to pay for one’s folly.