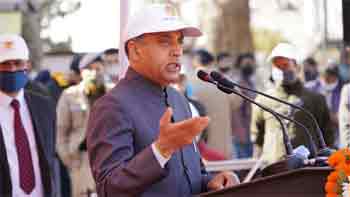 The Chief Minister said that the Safe City Project proposed to be executed in Mandi town under Nirbhaya fund would not only ensure safety of women in public places but would also provide smart solution to better traffic management and crowd control. He said that Union government provides funding in 90:10 ratio to the states having difficult terrains like Himachal Pradesh  under this project.

Jai Ram Thakur said that the project envisages design, development, implementation, operation and CCTV based surveillance system for Mandi town. The latest technology such as IP based camera infrastructure, unhindered viewing, monitoring record and storage of data would be done under this project. He said that this project intends to implement holistic and integrated surveillance system including commissioning of command and control centre at police line Mandi.

He said that the system would help in providing assistance to women, girls and senior citizens of Mandi city at the time of emergency besides facilitating smooth movement of ambulances, police vans and fire brigade. He said that this would also help the police in checking crime against women and maintaining law and order and improving traffic management.

Jai Ram Thakur said that the project also envisages effective monitoring of suspicious people, vehicles, objects etc. with respect to protecting women life and property. He said that continuous monitoring of some busy places such as bus stand, Indira Market, Chahota Bazar, Zonal Hospital and public places would be ensured to keep an eye on regular activities and also for providing emergency support.

The Chief Minister said that provision would also be made to provide cameras on police mobile vans to cover the disaster affected areas and crime scenes. These cameras would be integrated with the system which would directly feed information of the crime scene to command and control centre.

CGM H.P. Telecom Circle Jasvinder Singh Sahota apprised the Chief Minister that BSNL was the only company in India providing satellite mobile phones. He said that these phones could prove handy for ensuring better connectivity during various adventure activities such as paragliding, trekking, river rafting, mountaineering and disaster management.