In a letter to Prime Minister, Shri Modi said that the Union Home Minister yesterday made statement regarding some delinquent police officers of Gujarat Cadre. This is the second time that Union Home Minister has intervened in favour of such police officers and thus encouraging indiscipline. Some other Senior Ministers of the Union Cabinet have also made similar statement before the media. These statements are strictly against the Centre-State relationship protocol and a dangerous threat to the Federal set up of Indian governance.

In a letter to Prime Minister, he said that When the Union Government comes out in open supporting such in-disciplined conduct of an All India Service Officers then it should be a matter of concern for the entire nation. In other words, one is indirectly encouraging the political activities by Service Officers. Such blatant interference from Central Government will destroy the very fabric of Federal structure.

“Looking at the series of such incidents during last two years, I regret to bring to your notice that there seems to be a definite pattern of conspiracy in meddling with Gujarat's affairs. Such selective interference is a cause for major concern, as it goes against constitutional principles. Unfortunately, it appears that UPA government at the Centre is a party to these activities, in one way or other, with a strong hidden agenda to destabilize a progressive and performing State like Gujarat. I firmly believe that you cannot build a strong India by destabilizing and weakening Progressive and Development oriented States in a Federal structure. At any cost, we should not convert these constitutional arms as political battle-fields by misusing them”, Shri Modi said.

Union Home Minister has stated that “Rules do provide for the Central Government to take certain step at certain stage. But, it all depends on the concerned officers to invoke the situation”. The All India Service Act and Rules framed there-under are very clear and this matter concerning the officers being quoted falls under that. These officers borne on the State Cadre, are working in connection with the affairs of the State. Hence, as per the definition of the term “Government” given in the All India Service Rules, the State Government is the “Government” for them in respect of disciplinary matters. The State Government is competent to take any action against them including suspension, institution of departmental inquiry and imposition of penalty.

The role of the Disciplinary Authority is vested in the State Governments in the Federal structure under the All India Service Act and Rules. No authority, including the Central Government can usurp these powers. If the officers have any grievances on the issue of actions being taken by the State Government, they can represent to the State Government, or can take a legal recourse by approaching CAT, High Court, Supreme Court, etc. This position is absolutely clear with reference to the All India Service Act and Rules framed there-under by the GOI itself. Disciplinary action against Senior Officers for their misconduct and dereliction of duty are done as a matter of routine course without any intention of victimization. Even in the present cases, preliminary enquiry have been conducted and opportunity given to officers to explain their misconduct as per provisions of various statutory rules.

Thus, it is clear that the Centre cannot intervene in the cases that fall under the jurisdiction of the State. The police officers are to discipline the society and in discharge of their duties they are supposed to set up ‘high standards’. It is surprising that an officer who was absent from duty continuously for 10 months un-authorisedly is being defended by the Union Government. Any misconduct, dereliction of duty and recalcitrant behaviour of the officers cannot be tolerated, failing which it will lead to anarchy in Government.

Shri Modi requested the Prime Minister Dr. Manmohan Singh that these matters are required to view very seriously and appropriate instructions may be given to the concerned authorities so that such incidents are not repeated in future, in the interest of a healthy Centre-State relationship

The World is facing one of the biggest crisis since...

It is a real one-stop-shop solution of MSME 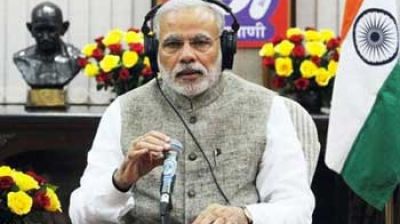 Lockdown has slowed down life but it has given an...