Home International Steps taken to counter terrorism are consistent with their obligations under international... 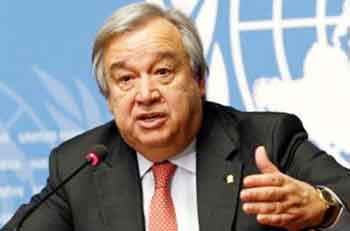 The United Nations has said that member states should ensure that measures taken to combat terrorism are consistent with their obligations under international law. The United Nations also said that the global body had no information about the whereabouts of al-Qaeda leader Ayman al-Zawahiri. The spokesman for UN Secretary-General Antonio Guterres gave this information in a statement.

US President Joe Biden said that Zawahiri was killed in a drone strike by the Central Intelligence Agency (CIA) in Kabul on Saturday evening. Zawahiri was hiding with his family in a house in Kabul.

Stéphane Dujarric, spokesman for UN Secretary-General Antonio Guterres, said in response to a question that we had no information about Zawahiri’s whereabouts. Responding to a question about the UN’s response to Zawahiri’s killing, Dujarric said the global organization is committed to fighting terrorism and strengthening international cooperation in countering the menace.

Member States must ensure that any measures taken to combat terrorism are consistent with their obligations under international law. Dujarric said that the United Nations is not a party to the 2020 Doha Agreement. The conditions for the withdrawal of US troops from Afghanistan were set under the Doha Agreement.

Under the deal, the Taliban had to ensure that it would not allow any of its members, other individuals or groups, including al-Qaeda, to use Afghan soil to endanger the security of the US and its allies. PLC/GT

The United Nations said: Our stand is to stop any kind of hate speech, violence and especially violence based on religious differences

India is committed towards the United Nations 2030 Agenda on SDGs

Here is the rate of exchange of one unit of foreign...

India will become a superpower of innovations towards making the world...