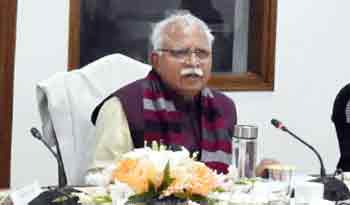 INVC NEWS
Chandigarh,
Haryana Chief Minister Manohar Lal said that in a bid to ensure availability of water in each and every agricultural field across the State, a new Micro Irrigation Scheme has been started. Under this scheme, four districts namely Bhiwani, Dadri, Mahendragarh and Fatehabad have been included in the first phase.  He informed that National Bank for Agriculture and Rural Development (NABARD) has also agreed to give subsidy under this scheme.

The Chief Minister said that under this scheme, farmers who will make clusters of at least 25 acres of land or more will be provided water through Micro Irrigation System. For this, a portal will soon be launched and applications from interested farmers will be invited.

Speaking on the occasion, Mr. Manohar Lal said that due to COVID-19, country’s and state’s economy has suffered a huge setback and to overcome this crisis which has badly affected various sectors of the economy a relief package of Rs. 20 lakh crore was given by the Central Government under Atmanirbhar Bharat campaign for revival of various sectors. “Now we have to ensure that out of this Rs. 20 lakh crore package, projects worth at least Rs. 80, 000 crore will be planned so as to ensure that lives of the people of the state can be improved,” said the Chief Minister.

“While drafting the welfare schemes, we have to keep the upliftment of poorest of the poor in mind. ’Antyodaya’ will not be achieved till the benefit of these welfare schemes do not reach the grass root levels,” said Mr. Manohar Lal.

The Chief Minister said that evaluation of progressive farmers will be done on the basis of 8-10 standards for which a portal will be developed. Through these progressive farmers, it will be ensured that one such farmer further encourages at least 10 farmers to become progressive farmers. Similarly, under Peri-urban agriculture farming, districts falling in NCR region will be encouraged to adopt the farming techniques as per the requirement of the area instead of traditional farming. He said that a list of every ancillary activity related to farming should be made and a separate plan should be made for it and work should be done according to ‘One District One Product’. Further, the target should be set for one year rather than long term targets.

While interacting with the bank representatives, the Chief Minister said that there are no bank branches in about 400-500 villages. There is a need to provide banking facilities in such villages also. For this facility of one mobile van for five villages can be arranged.

The Chief Minister that through information technology, several concrete steps have been taken in the direction of establishing Good Governance in Haryana. The work of digitization of revenue records of about 7,000 villages of the state, except for 42 villages has been completed and the link has also been provided ensuring transparency and leaving no scope for any fraud in the sale and purchase of land.

The Chief Minister said that for the purpose of identifying every inch of land in the State, an ambitious scheme called SVAMITVA has been started.

The Chief Minister said that a Pond Authority has been constituted for the rejuvenation of ponds in the State. Under this, 1700 ponds will be cleaned in the first phase so that the drain water coming out from villages does not overflow into the streets and it can be used for irrigation. Separate command areas will be defined for this. For the purpose of improving the water level, ‘Atal Bhujal Yojana’ is also being implemented.