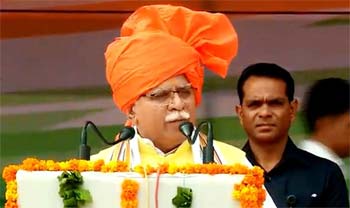 INVC NEWS
Haryana,
Haryana Chief Minister Manohar Lal today laid the foundation stone of Vigyan Bhawan to be constructed on 8.5 acres area in Sector-78, Faridabad at a cost of Rs 400 crore. With the construction of Vigyan Bhawan, the people from state and the country would come here for conference and there would be more economic development in the area.

The Chief Minister was addressing the people during Jan Aashirvad Yatra in Tigaon assembly constituency today.

He said that the state government is running many welfare schemes for the poor. Many development schemes have been implemented to raise the standard of living  standard of the people belonging to poor families, which also include reaching of gas connections in poor households, medical treatment up to Rs. Five lakh and other forums have been opened so as to make the life of the people easy and comfortable.

He said that there are many big and small industries in Faridabad and the present state government has worked to end the problems of these industries. He said that 50,000 new industries have been set up during the tenure of the present state government, in which about six lakh people have been provided employment. The State Government has worked in a transparent manner and has given jobs to people on merit basis. Apart from this, e-Disha Kendras, Saral Kendras, Antyodaya Kendras have opened to provide services to people under one roof. He said that the country's first Skill Development University has been opened in Palwal of Haryana to make the youth employable.

Earlier, BJP State President and MLA, Mr Subhash Barala said that the state government has carried out development works in a transparent and without any bias. Government jobs have been provided on merit basis.