State is committed to provide transparent and responsive governance 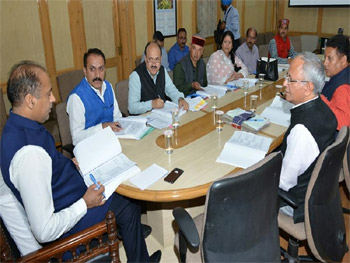 INVC NEWS
Shimla,
The Medicine Retail Shops of H.P State Civil Supplies Corporation (HPSCSC) Limited would be made online to facilitate the patients and their attendants besides ensuring transparency and efficient services to consumers.  This was disclosed by Chief Minister Jai Ram Thakur while presiding over the 159th meeting of Board of Directors of H.P. State Civil Supplies Corporation here today.

Chief Minister said that presently 29 medicine shops were being run by the Corporation in different government hospitals and complexes of health institutions.  He said that State Government is committed to provide transparent and responsive governance to the people of the State.

Jai Ram Thakur said that CCTV cameras had been installed in 67 Whole Sale Godowns owned by the Corporation to keep surveillance on the godowns and efforts were on to bring remaining four godowns under it at the earliest. He said that steps were also being taken to bring all the 338 hired godowns under CCTV Cameras.

Managing Director of the Corporation B.C. Badalia conducted the proceedings of the meeting.

Non Official Members of the Board of the Directors Bhim Sen, Bina Thakur, Captain Ramesh Chand Atwal and Bhima Ram (Bhishm)Thakur also gave their valuable suggestions in the meeting.