State has made several spectacular achievements in the different sectors of the economy : Prof. Prem Kumar Dhumal

The Annual Plan for the year 2012-13 for the state of Himachal Pradesh was finalised here today at a meeting between Deputy Chairman, Planning Commission, Mr.Montek Singh Ahluwalia and Chief Minister of Himachal Pradesh, Mr.Prem Kumar Dhumal. The plan size has been agreed at Rs. 3,700 crore. The state government was appreciated for achievements in different sectors of economy including growth rate of 8.1% during 11th Plan and 7.6% for 2011-12. Achievements in agriculture, education, health, power and other core growth sectors of economy were appreciated. It was also pointed out that the per capita income of the state has increased by 33.02% during 2004-05 to 2010-11 which is higher than the national level. It was pointed out that state needs to improve focus on infrastructure development which was necessary for fully exploiting the abundant potential in sectors like tourism and hydroelectricity. Policy initiatives aimed at public private partnership were needed to accelerate infrastructure development. Planning Commission assured the state Government of support in expediting environment and forest clearances for electricity generation process. All on the issue of ”green bonus” for hill states, Mr.Ahluwalia said that the issue has been referred to the committee under chairmanship of member, B.K.Chaturvedi for studying development needs of hill states arising from management of forest land with specific focus on creation of infrastructure, livelihood and human development. On the issue of discrimination of funding pattern of Centrally sponsored schemes for special category states, it was pointed that a subcommittee was looking into the rationalisation and restructuring of Centrally Sponsored schemes to enhance flexibility. Briefing the Commission on the performance of the state Chief Minister Mr.Dhumal said the state has made several spectacular achievements in the different sectors of the economy. It has won 58 awards conferred by the Government of india, International Agencies and Prestigious Institutions in the country. In order to provide responsive and accountable administration, the Himachal Pradesh Public Service Guarantee Bill 2011 has been passed. 12 departments have been notified under this act to provide time bound services to the people of the State. We have completed 33 lakh enrolments under AADHAAR and the complete enrolment will be done by July, 2012. Mr.Dhumal said social services would get top priority in the plan with 32.15% of outlay earmarked for the sector. Next in priority would be transport and communication sector which will get 21.05% of plan size. Energy sector would be the next priority of the state Government and it would involve private sector in a big way in hydel power development. He said the state’s indicators in the education and health sector are amongst the best in the country and every effort would be made to sustained the gained achieved in these sectors efforts are on to improve infant Mortality Rate, Maternal Mortality Ratio and Child Sex Ratio. Mr.Dhumal said electricity, gas and water supply together with hotel and restaurants would be the major growth engines for 12th Plan in which state has targeted a growth rate of 9.5%, a jump of 1.4% from the current plan. He pleaded for increase in the allocations under central funds so the State as cost of construction in hill State was much higher. 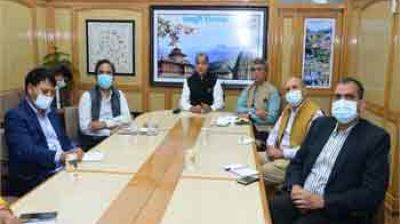 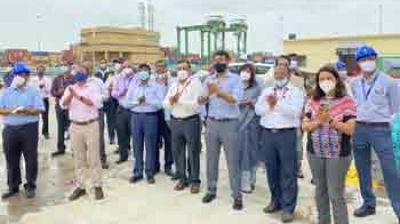