Home Other Indian State News Somewhere there is heavy rain and somewhere people are suffering from the... 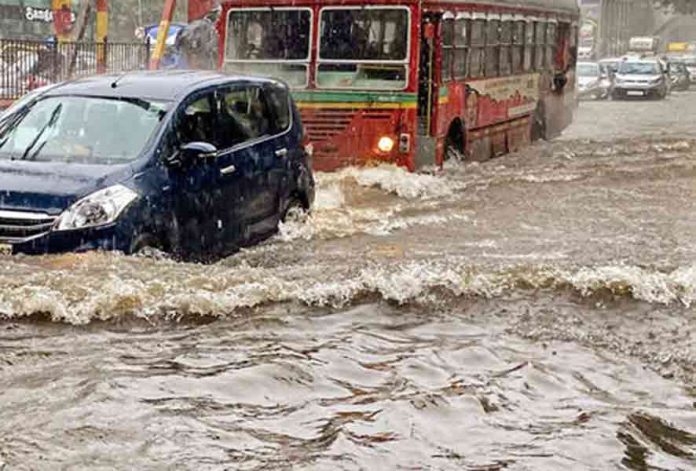 Somewhere there is heavy rain and some people are suffering from the heat.

Traffic came to a complete standstill as four feet of water was flooded on roads from rural areas to cities due to torrential rains. Rivers and drains are in spate and flood-like situation was witnessed in many villages. Auto rickshaws remained off the roads on Wednesday. Because of this people had to come to the station on foot in knee-deep water. People had to face a lot of problems due to heavy waterlogging in the low-lying areas of Vasai-Virar. People have suffered a lot due to water entering shops and houses.

The Municipal Corporation has installed pumps in areas with high waterlogging. But even that did not help. The water is not receding due to continuous heavy rain. Several high profile societies of Vasai, Nalasopara and Virar have been flooded with water each two feet.

Incessant rains in Mumbai have flooded many areas. On Wednesday, due to rain, people coming to Mumbai in connection with work had to face trouble. People heaved a sigh of relief as the rain stopped in the afternoon. Traffic slowed down in Mumbai due to rain and potholes on the roads. At the same time, the Meteorological Department says that there may be heavy rain in Mumbai for the coming few days. In such a situation, there is little hope of relief for Mumbaikars from the troubles of rain. Mumbai city on Wednesday recorded 107 mm of rain in the last 24 hours, while the east suburb received 171.68 mm and the west suburb 152 mm. On Wednesday, former Mumbai Mayor Kishori Pednekar reached the BMC Disaster Control Room to take stock of the situation in the city.

The Andheri sub-way, Andheri Market, Khar sub-way, National College and Dahisar sub-way in the western suburbs were under water. BMC claims that the water came out from here within a few hours. BMC Disaster Management received calls for house or wall collapse at 18 places in Mumbai due to rain, while complaints of falling trees and branches at 34 places and short circuit at 20 places.

Three people were injured in a landslide in Sion’s Chunabhatti area due to rain. A landslide occurred at Nagoba Chowk near Swadeshi Mill in Chunabhatti, in which a one-storey hut was set on fire, due to which three members of the same family were injured. The injured include Shubham Sonawane (15), Prakash Sonawane (40) and Surekha Veerkar (20). Prakash Sonawane was injured in the accident and Veerkar suffered a head injury. The three injured have been admitted to Sion Hospital, where their condition is stated to be stable. plc/gt