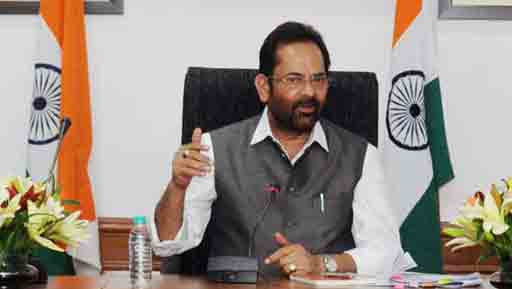 While chairing a joint meeting of Maulana Azad Education Foundation and Central Waqf Council in New Delhi today, Shri Naqvi said that some people are involved in conspiracy to “hijack peace and truth by malafide misinformation” over the Citizenship Act and the NRC.

Shri Naqvi said that Members of Maulana Azad Education Foundation and Central Waqf Council will launch an awareness campaign across the country on the Citizenship Act and the NRC to demolish the “malafide misinformation and fake fabricated propaganda” being carried out by some people for their “narrow interests”.

Shri Naqvi said that as a part of the awareness campaign, Members of MAEF and CWC will meet the common people, religious representatives, educational institutes, social organisations and brief them on the Citizenship Act and the NRC.

Shri Naqvi said that some people are conspiring to disturb the peace and harmony in the country and “Anarchy on NRC” is evidence of this conspiracy. The fact is that, the NRC, started in 1951 in Assam is limited only to Assam. Linking the citizenship of Muslims and NRC is a blatant lie. The NRC process in Assam has not been completed yet. Those people who have not found place in the list, can appeal to tribunals and also courts. The Government is also helping such people.

Shri Naqvi said that those people who are trying to “hijack peace through rumour and malafide misinformation” should understand that they will be failed in their conspiracy. “Satyamev Jayte” will demolish political propaganda of “Jhuthmev Jayte”.

Shri Naqvi said that we have to defeat “Conspiracy to create Confusion” by those people who are mixing Citizenship Act and NRC. We have to remain cautious of “Evils of Misinformation”.

The country has adequate facilities and resources to tackle Corona challenges

India is the world’s largest centre of spiritual-religious knowledge

Talibani mentality on women’s liberty, dignity, empowerment and constitutional equality will not be tolerated

The 34th edition of “Hunar Haat”, being organised at Vanita Vishram, Surat from today